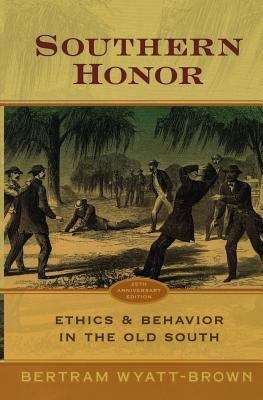 Southern Honor revolutionized our understanding of the antebellum South, revealing how Southern men adopted an ancient honor code that shaped their society from top to bottom. Using legal documents, letters, diaries, and newspaper columns, Wyatt-Brown offers fascinating examples to illuminate the dynamics of Southern life throughout the antebellum period. He describes how Southern whites, living chiefly in small, rural, agrarian surroundings, in which everyone knew everyone else, established the local hierarchy of kinfolk and neighbors according to their individual and familial reputation. By claiming honor and dreading shame, they controlled their slaves, ruled their households, established the social rankings of themselves, kinfolk, and neighbors, and responded ferociously against perceived threats. The shamed and shameless sometimes suffered grievously for defying community norms. Wyatt-Brown further explains how a Southern elite refined the ethic. Learning, gentlemanly behavior, and deliberate rather than reckless resort to arms softened the cruder form, which the author calls "primal honor." In either case, honor required men to demonstrate their prowess and engage in fierce defense of individual, family, community, and regional reputation by duel, physical encounter, or war. Subordination of African-Americans was uppermost in this Southern ethic. Any threat, whether from the slaves themselves or from outside agitation, had to be met forcefully. Slavery was the root cause of the Civil War, but, according to Wyatt-Brown, honor pulled the trigger.