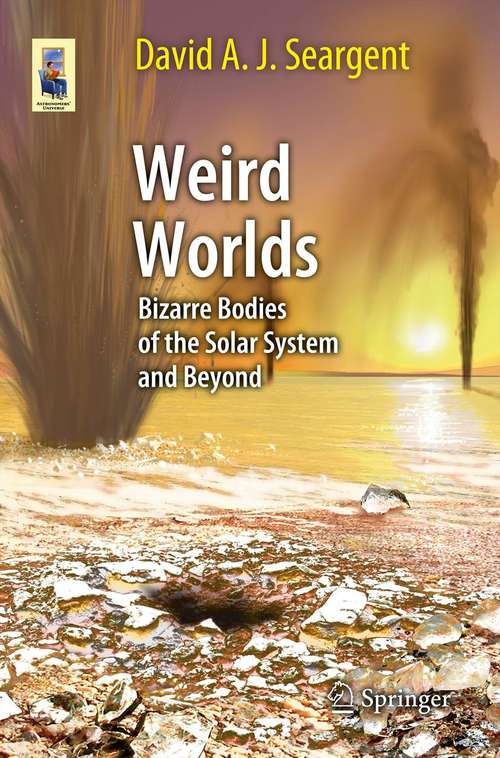 "Weird Worlds" is the third book in David Seargent's "Weird" series. This book assumes a basic level of astronomical understanding and concentrates on the "odd and interesting" aspects of planetary bodies, including asteroids and moons. From our viewpoint here on Earth, this work features the most unusual features of these worlds and the ways in which they appear "weird" to us. Within our own Solar System, odd facts such as the apparent reversal of the Sun in the skies of Mercury, CO2-driven fountains of dust on Mars, possible liquid water (and perhaps primitive life!) deep within the dwarf planet Ceres, and a variety of odd facts about the planetary moons are all discussed. A special chapter is devoted to Saturn's giant moon Titan, and its methane-based weather system and "hydrological" cycle. This chapter also includes recent speculation on the possibility of methane-based organisms and the form that these might take, if they really do exist. Beyond our Solar System, the book looks at the range of worlds discovered and hypothesized.

In "Weird Worlds," the author discusses planets where temperatures are so high that it rains molten iron, and others so cold that liquid methane floods across plains of ice! Worlds are described where the lightest element acts like a metal and where winds blow at thousands of miles per hour - as well as possible planets whose orbits are essentially parabolic.

In keeping with previous titles in David Seargent's "Weird" series, "Weird Worlds" contains several projects that astronomers of all levels can undertake.