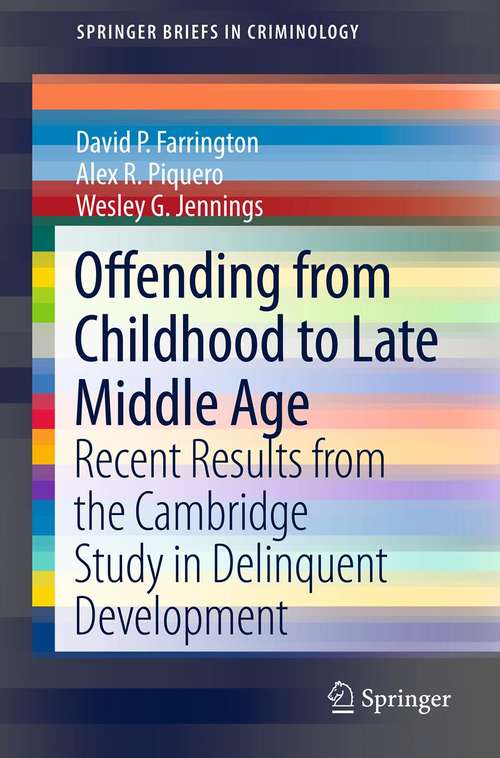 Offending from Childhood to Late Middle Age is a timely volume by leading researchers in Life Course Criminology, which reports new findings from The Cambridge Study in Delinquent Development, a prospective longitudinal survey of 411 South London males first studied at age 8 in 1961. The main aim of the study is to advance knowledge about criminal careers up to age 56.

At the time of these most recent findings, forty-two percent of the males were convicted, with an average ten-year conviction career. Only seven percent of the males accounted for half of all convictions. Almost all of the males (93 percent) reported committing an offense in four age ranges, compared with 29 percent who were convicted at these ages. There were on average of 39 self-reported offenses per conviction. Group-based trajectory analyses indicated that, while there were distinct groups of offenders who followed different age-crime trajectories between ages 10 and 56, five groups best characterized the criminal careers of the men, with two groups, high adolescence peak and high rate chronic, exhibiting the most offending. Also, the offending trajectories were predicted by individual and environmental childhood risk factors, with the most chronic offenders (to age 56) having the most extreme scores on childhood risk. Based on these results, risk assessment instruments could be developed and risk-focused prevention could be implemented in early childhood, including parent training, pre-school intellectual enrichment programs and home visiting programs, in order to prevent chronic styles of offending from being initiated.

"This is a 'must read' for anyone seeking to understand the development and course of crime from childhood through adulthood. Comparative analyses of officially recorded and self-reported offending and analyses of the predictive power of childhood risks to distinguish offending trajectories are important contributions of this new milestone in the Cambridge Study in Delinquent Development."

"For more than four decades the Cambridge Study of Delinquent Development has been a guiding light for research on what has come to be called developmental criminology. This latest installment is still another demonstration of the importance of this seminal study."