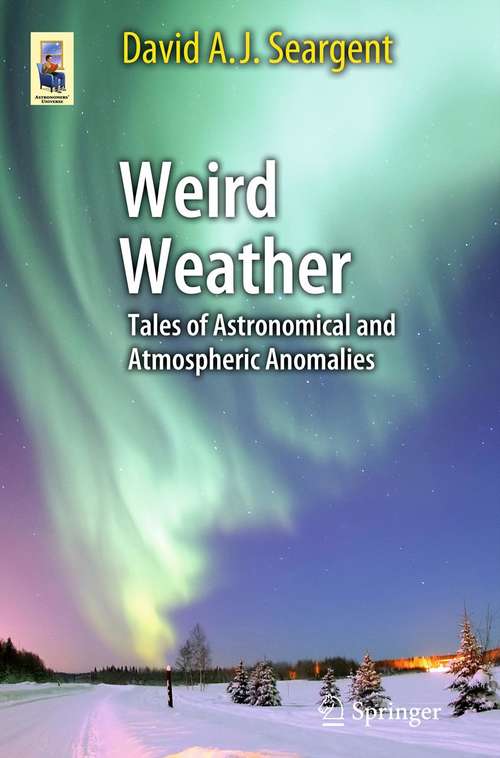 This book is, in a sense, a sequel to David Seargent's first Springer book Weird Astronomy (2010). Whereas Weird Astronomy extended over a broad range of purely astronomical topics, the present work concentrates on phenomena closer to home; the atmospheric and "shallow space" events as opposed to deep space events. The line between astronomy and meteorology is blurred - a fact that is discussed in Weird Weather. It is not primarily a book of "wonders" or of the unexplained, although some of the topics covered remain mysteries. It is primarily directed toward those who are fascinated by climate and weather, and who are open-minded when considering Earth's climate, what drives it, and what are the causes of climate change. The author, David A. J. Seargent, presents the facts with a balanced and scientific approach.

Weird Weather: Tales of Astronomical and Atmospheric Anomalies is about strange, unusual, and apparently inexplicable observations of the air and sky. Primarily these are in the Earth's atmosphere, but there are corresponding phenomena in the atmospheres of other planets of the Solar System - lightning on Venus, Jupiter, and Saturn, whirlwinds and dust storms of Mars, and auroras on Jupiter. Topics include anomalous lights, anomalous sounds, spectacular effects of cloud illumination by the Sun or Moon, lightning phenomena, electrophonic sounds of lightning, aurora and meteors, tornado and whirlwind phenomena on Earth and Mars, usual atmospheric effects, mirages, and the possible astronomical influences on cloud and climate.