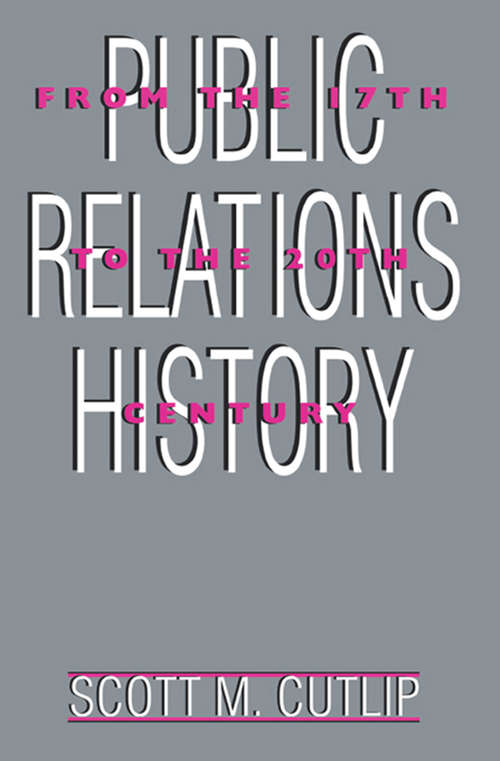 This important volume documents events and routines defined as public relations practice, and serves as a companion work to the author's The Unseen Power: Public Relations which tells the history of public relations as revealed in the work and personalities of the pioneer agencies. This history opens with the 17th Century efforts of land promoters and colonists to lure settlers from Europe -- mainly England -- to this primitive land along the Atlantic Coast. They used publicity, tracts, sermons, and letters to disseminate rosy, glowing accounts of life and opportunity in the new land. The volume closes with a description of the public relations efforts of colleges and other non-profit agencies in the late 19th and early 20th centuries, thus providing a bridge across the century line. This study of the origins of public relations provides helpful insight into its functions, its strengths and weaknesses, and its profound though often unseen impact on our society. Public relations or its equivalents -- propaganda, publicity, public information -- began when mankind started to live together in tribal camps where one's survival depended upon others of the tribe. To function, civilization requires communication, conciliation, consensus, and cooperation -- the bedrock fundamentals of the public relations function. This volume is filled with robust public struggles -- the struggles of which history is made and a nation built: * the work of the Revolutionaries, led by the indomitable Sam Adams, to bring on the War of Independence that gave birth to a New Nation; * the propaganda of Alexander Hamilton, James Madison, and John Jay in the Federalist papers to win ratification of the U.S. Constitution -- prevailing against the propaganda of the AntiFederalists led by Richard Henry Lee; * the battle between the forces of President Andrew Jackson, led by Amos Kendall, and those of Nicholas Biddle and his Bank of the United States which presaged corporate versus government campaigns common today: * the classic presidential campaign of 1896 which pitted pro-Big Business candidate William McKinley against the Populist orator of the Platte, William Jennings Bryan. This book details the antecedents of today's flourishing, influential vocation of public relations whose practitioners -- some 150,000 professionals -- make their case for their clients or their employers in the highly competitive public opinion marketplace.