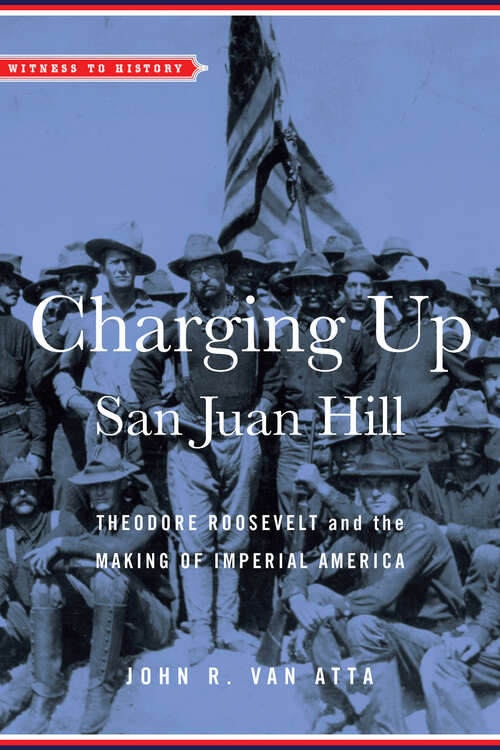 How Theodore Roosevelt and his Rough Riders exemplified "manhood" and civic virtue.Below a Cuban sun so hot it stung their eyes, American troops hunkered low at the base of Kettle Hill. Spanish bullets zipped overhead, while enemy artillery shells landed all around them. Driving Spanish forces from the high ground would mean gaining control of Santiago, Cuba, and, soon enough, American victory in the Spanish-American War. No one doubted that enemy fire would claim a heavy toll, but these unusual citizen-soldiers and their unlikely commander—39-year-old Colonel Theodore Roosevelt—had volunteered for exactly this kind of mission.In Charging Up San Juan Hill, John R. Van Atta recounts that fateful day in 1898. Describing the battle’s background and its ramifications for Roosevelt, both personal and political, Van Atta explains how Roosevelt’s wartime experience prompted him to champion American involvement in world affairs. Tracking Roosevelt’s rise to the presidency, this book argues that the global expansion of American influence—indeed, the building of an empire outward from a strengthened core of shared values at home—connected to the broader question of cultural sustainability as much as it did to the increasing of trade, political power, and military might.At the turn of the twentieth century, Theodore Roosevelt personified American confidence. A New York City native and recovered asthmatic who spent his twenties in the wilds of the Dakota Territory, Roosevelt leapt into the war with Spain with gusto. He organized a band of cavalry volunteers he called the Rough Riders and, on July 1, 1898, took part in their charge up a Cuban hill the newspapers called San Juan, launching him to national prominence. Without San Juan, Van Atta argues, Roosevelt—whom the papers credited for the victory and lauded as a paragon of manhood—would never have reached a position to become president.