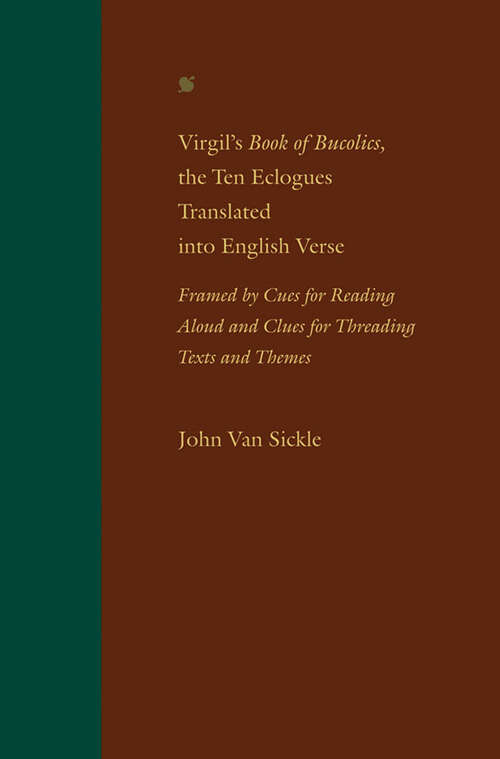 This highly original work builds on two neglected facts about Virgil's Book of Bucolics: its popularity on the bawdy Roman stage and its impact as sequence poetry on readers and writers from the Classical world through the present day.The Bucolics profoundly influenced a wide range of canonical literary figures, from the contemporaneous Horace, Propertius, and Ovid through such successors as Calpurnius, Sannazaro, Marot, Spenser, Milton, Wordsworth, Robert Frost, and W. H. Auden. As performed, the work scored early success. John Van Sickle's artfully rendered translation, its stage cues, and the explanatory notes treat for the first time the book's ten short pieces as a thematic web. He pays close heed to themes that return, vary throughout the work, and develop as leitmotifs, inviting readers to trace the threads and ultimately to experience the last eclogue as a grand finale. Introductory notes identify cues for casting, dramatic gesture, and voice, pointing to topics that stirred the Roman crowd and satisfied powerful patrons. Back notes offer clues to the ambitious literary program implicit in the voices, plots, and themes. Taken as a whole, this volume shows how the Bucolics inaugurated Virgil's lifelong campaign to colonize for Rome the prestigious Greek genres of epic and tragedy—winning contemporary acclaim and laying the groundwork for his poetic legend. Reframing pastoral tradition in Europe and America, Van Sickle's rendering of the Book of Bucolics is ideal for students of literature and their teachers, for scholars of classical literature and the pastoral genre, and for poetological and cognitive theorists.