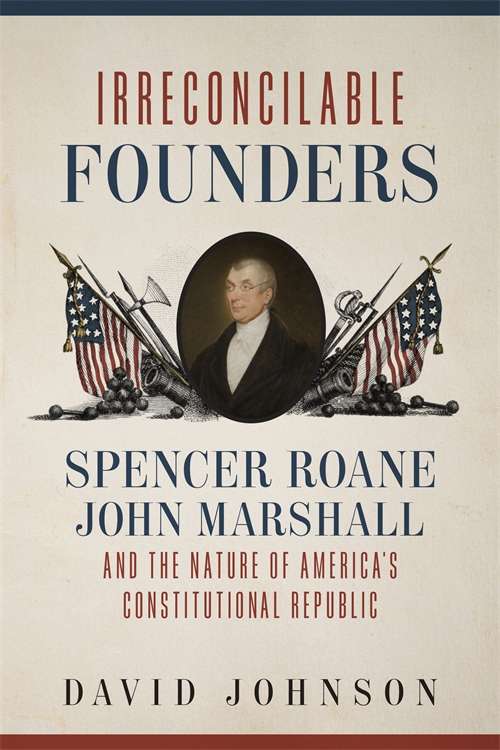 Virginians dominate the early history of the United States, with Washington, Jefferson, Madison, Monroe, Patrick Henry, George Mason, George Wythe, and John Marshall figuring prominently in that narrative. Fellow Virginian Spencer Roane (1762–1822), an influential jurist and political thinker, was in many ways their equal. Roane is nonetheless mostly absent in accounts of early America. The lack of interest in Roane is remarkable since he was the philosophical leader of the Jeffersonians, architect of states’ rights doctrine, a legislator, essayist, and, for twenty-seven years, justice of the Virginia Supreme Court. He was the son-in-law of Henry, a confidant of Jefferson, founder of the influential Richmond Enquirer, and head of the “Richmond Junto.” Roane’s opinions established judicial review of legislative acts ten years before Supreme Court Chief Justice Marshall did the same in Marbury v. Madison. Roane also brought down Virginia’s state-sponsored church. His descent into historical twilight is even more curious given his fierce criticism—both from the bench and in the Richmond Enquirer—of Marshall’s nationalistic decisions. Indeed, the debate between these two judges is perhaps the most comprehensive discussion of federalism outside of the arguments that raged over the ratification of the United States Constitution. In Irreconcilable Founders, David Johnson uses Roane’s long-lasting conflict with Marshall as ballast for the first-ever biography of this highly influential but largely forgotten justice and political theorist. Because Roane’s legal opinions gave way to those of Marshall, historians have tended to either dismiss him or cast him as little more than an annoying gadfly. Equally to blame for his obscurity is the comparative inaccessibility of Roane’s life: no single archive houses his papers, no scholars have systematically reviewed his legal opinions, and no one has methodically examined his essays. Bringing these and other disparate sources together for the first time, Johnson precisely limns Roane’s career, personality, and philosophy. He also synthesizes the judge’s wide-ranging jurisprudence and analyzes his predictions about the dangers of unchecked federal power and an activist Supreme Court. Although contemporary jurists and politicians disregarded Roane’s opinions, many in today’s political and legal arenas are unknowingly echoing his views with increasing frequency, making this reappraisal of his life and reassessment of his opinions timely and relevant.