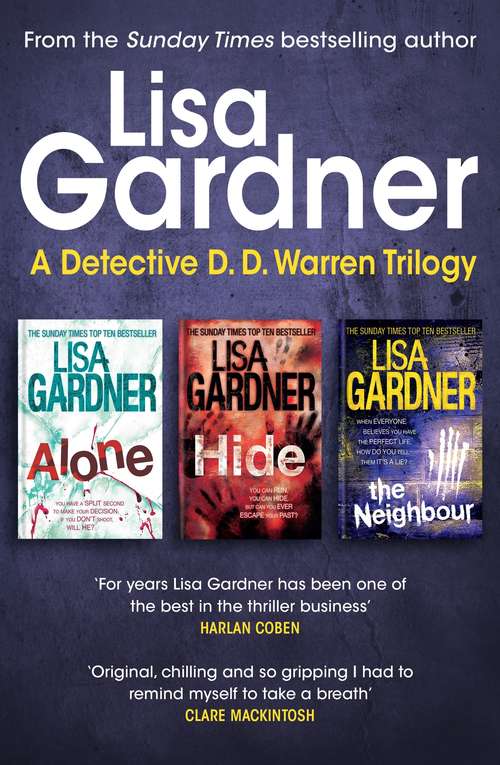 Discover the first three gripping novels in Lisa Gardner's much-loved DETECTIVE D.D. WARREN series: ALONE, HIDE and THE NEIGHBOUR. 'Original, chilling and so gripping I had to remind myself to take a breath' Clare Mackintosh'For years Lisa Gardner has been one of the best in the thriller business' Harlan Coben'No one owns this corner of the genre the way Lisa Gardner does' Lee ChildALONE/FONT> YOU HAVE A SPLIT SECOND TO MAKE YOUR DECISION. IF YOU DON'T SHOOT, WILL HE?As he watches a potentially fatal hostage situation unfold through the scope of his sniper rifle, Massachusetts State Trooper Bobby Dodge knows that he may be all that stands between life and death. But from the moment Bobby pulls the trigger, killing an armed man holding his own wife and child hostage, it may be Bobby's own life that is lost.Detective D. D. Warren's investigation into the shooting leads her to the impossibly beautiful young widow, Catherine Rose Gagnon, and the darkness in her past. Even as the truth behind the façade of this wealthy Boston family's life is revealed, the body count rises. And with a sadistic, vengeful killer newly released from prison, everyone must be on their guard. For he strikes the solitary wanderer - and no one can stay protected forever...HIDE/FONT>YOU CAN RUN. YOU CAN HIDE. BUT CAN YOU EVER ESCAPE YOUR PAST?Annabelle Granger was seven years old when it first happened. She arrived home to find the suitcases packed and her parents desperate to flee their home. Then followed years spent running, from what, or who, she doesn't know, just an endless blur of new faces and new towns.Now, aged 30, Annabelle has finally settled in Boston and is happy with her life. Until the bodies of six girls are found in the grounds of an abandoned mental institute and a newspaper declares her one of the victims.Detectives D. D. Warren and Bobby Dodge are determined to unravel the decades-old riddle and they fear that the discovery signals the return of a notorious serial killer, Mr Bosu - Bobby's worst nightmare. As they get closer to the truth they will all be forced to confront the uncomfortable truths in their pasts; because ultimately, there is no hiding place...THE NEIGHBOUR/FONT>WHEN EVERYONE BELIEVES YOU HAVE THE PERFECT LIFE, HOW DO YOU TELL THEM IT'S A LIE?A house in suburban Boston, a perfect family; pretty, young mother Sandra Jones seemingly has it all. But when Sandra goes missing, leaving her four-year-old daughter as the only witness, it appears that all is not as idyllic as her neighbours would believe...As Detective D. D. Warren delves deeper into the fabric of the Jones' lives, she discovers the darkness therein. With Sandra's husband Jason seemingly intent on destroying evidence and isolating his young daughter, D. D. must determine if he is struggling to protect his way of life or fighting to cover his tracks.The perfect family or the ultimate lie?