Euroscepticism and the Future of Europe 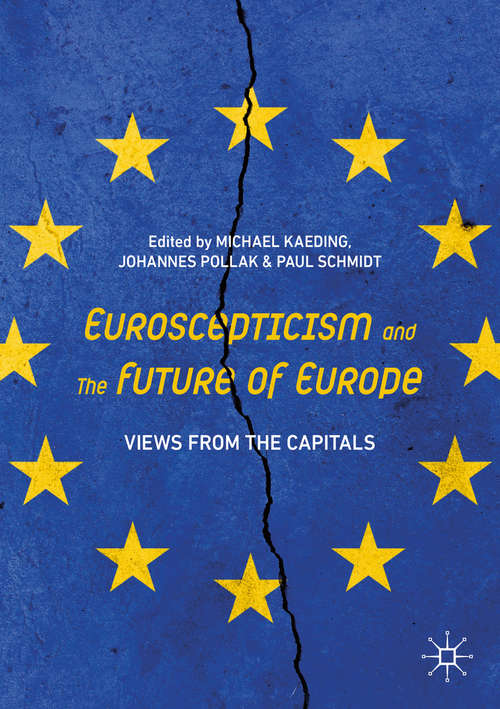 "The European Parliament elections in May 2019 did not bring about the rise of populism in Europe that had been feared by many. Instead, while populism was contained, a broad pro-European majority emerged that today carries the new European Commission with its ambitious green, digital and geopolitical agenda.  However, Euroscepticism remains a significant force to be reckoned with in national and EU-policy making. The present book offers a better understanding of the different types of Euroscepticism that exist across Europe. It also shows that Euroscepticism is best addressed by understanding well the often valid concerns that are at the origins of Eurosceptic forces. If this is done in time, Euroscepticism is not something to be afraid of. It is part of a vibrant European democracy that is resilient enough to embrace those who criticise the reality of the European project with good arguments; and that stands ready to develop and improve day by day to become a more perfect Union.” - Martin Selmayr, Head of the European Commission’s representation in Austria"This book comes at the right time. European integration seems more contested than ever, but is it really? This book answers this question by probing into 40 shades of Euroscepticism, within and beyond the EU Member States. It is a must read for academics and practitioners alike."- Christine Neuhold, University of Maastricht, The Netherlands"With this book, the authors offer readers of European politics a treasure trove, with valuable insights into the variety of populist and nationalist forces that oppose mainstream European integration. Faced with such a jumble of eurosceptic parties pursuing narrow and in many cases reactionary agendas, the need for proper federal political parties becomes self-evident. Only then will the diverse interests and aspirations of citizens be given realistic expression at the EU level."- Andrew Duff, President, The Spinelli GroupThis book sheds light on how the increasing prominence of Eurosceptic and nationalist parties is having an impact on the thinking of mainstream parties, their representatives in the European Parliament, and the future of Europe. It is timed to coincide with the strategic vision of Council, Commission, and Parliament, as well as the next phase of Brexit negotiations. The book provides perspectives on the future of the European project from authors in all the EU Member States, as well as neighboring European countries and potential applicant nations. Furthermore, it includes a Foreword by the Vice-president of the European Parliament.With many Eurosceptic parties now in national government, or winning European elections and thus exerting influence over the national debate, this book maps and analyses the nature and impact of Euroscepticism—and new nationalist tendencies—in the different party systems of Europe.As national political parties are the gatekeepers of the process of political representation, they play a pivotal role in mobilizing civil society and in setting the political agenda. They shape politics at a national level, but also determine the way in which Europe plays out—or does not play out—as a political issue. Thus, it is from the national capitals that the very future of Europe emerges.