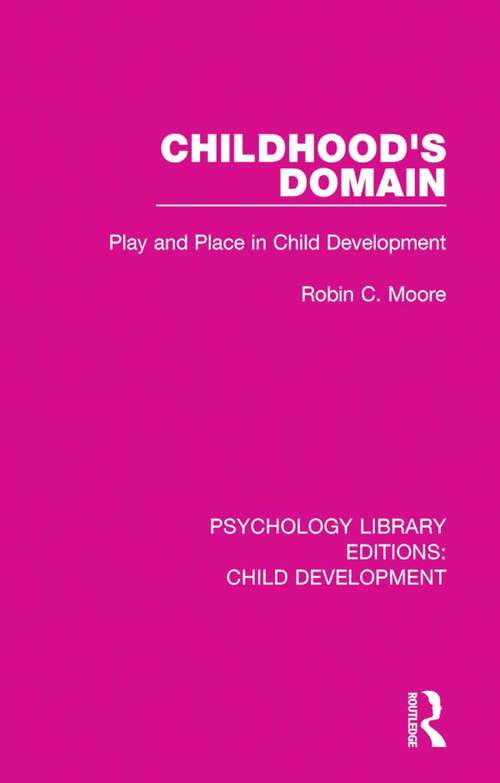 Where do children go and what do they do outdoors? How do they evaluate their own environment? What are their likes and dislikes? What would they like to see added or changed? How can the outdoor environment support healthy child development? How is the impact of the environment affected by its social and physical characteristics? How can its developmental impact be strengthened through public policy?

These are some of the questions addressed by Childhood’s Domain, originally published in 1986, in which children, as ‘expert’ research collaborators, describe their largely unseen life outdoors. On field trips to secret play places around their homes, in streets, in parks, and in places laid waste and abandoned by adult society, they reveal both the pleasure and difficulties of play in the city. A central concept of the book is a new term, terra ludens, which represents the accumulated developmental support that each child receives from her or his personal play spaces. Terra ludens reflects the degree to which each child acquires an intuitive sense of how the world is by playing with it.

Field research for the book was conducted in London, Stevenage New Town and Stoke-on-Trent. Neighbourhood sites were deliberately chosen to contrast and compare children’s reactions to the characteristics of ‘big city’, ‘new town’ and ‘old industrial city’ environments. The most interesting experiences were encountered with children in Stoke-on-Trent. Here, in former mineral workings functioning as ‘playgrounds’ equipped with relics from the heyday of the industrial revolution, in new open spaces reclaimed from industrial ‘wastelands’, and in older parks dating from Victorian times, children demonstrated the creative possibilities of a landscape of opportunities lacking in the other two sites. Even so, children in all three sites revealed great ingenuity in making do with whatever resources they could find to create viable play environments for themselves.