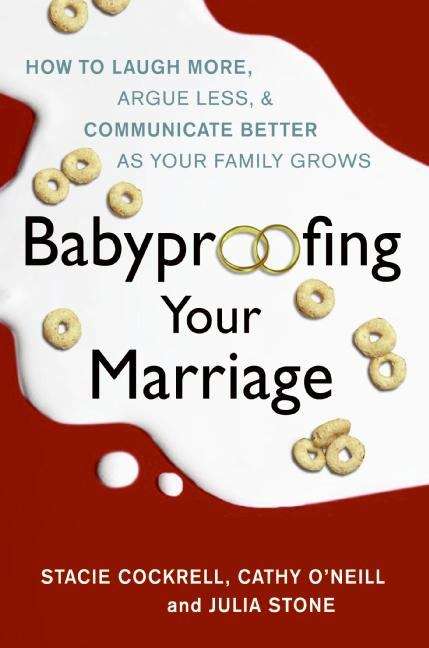 The Ten O'Clock Shoulder Tap-Considered by many men to be a form of foreplay. A paw on a wife's shoulder is how some men indicate their desire for sex. The Tap is rarely accompanied by a term of endearment or any other verbal form of communication and is seldom well received by the often-sleeping/almost-always-exhausted wife. The frustrated husband, meanwhile, wonders if his wife has pulled a Bait and Switch in the bedroom.

Clash of the Grannies-A high stakes "who will have the greatest influence on the grandkids" tournament played by each set of grandparents. Competitive categories include: the Title Championship (who gets to be called "Grandma"), the Battle for Floor and Wall Space, the Battle for Face Time, and Gratuitous Grandparental Gift-Giving.

The Babyproofers are three women who wouldn't trade their roles as mothers for anything, and they love their husbands deeply. But after living through it and hearing the stories of hundreds of other couples, they know that with young children in the house, you need to block the stairs with baby gates, put plastic covers over the outlets, AND take the necessary steps to safeguard your marriage.

Babyproofing Your Marriage is the warts-and-all truth about how having children can affect your relationship. The authors explore the transition to parenthood in light of their own experiences, with input from their husbands and commentary from men and women across the country. Their evenhanded approach to both sides of the marital equation allows spouses to understand each other in a whole new way.

With loads of humor and practical advice, the Babyproofers will guide first-time parents and veterans alike around the rocky shores of the early parenting years. Don't fall prey to common relationship pitfalls: Babyproof Your Marriage!