An Environmental History of Australian Rainforests until 1939 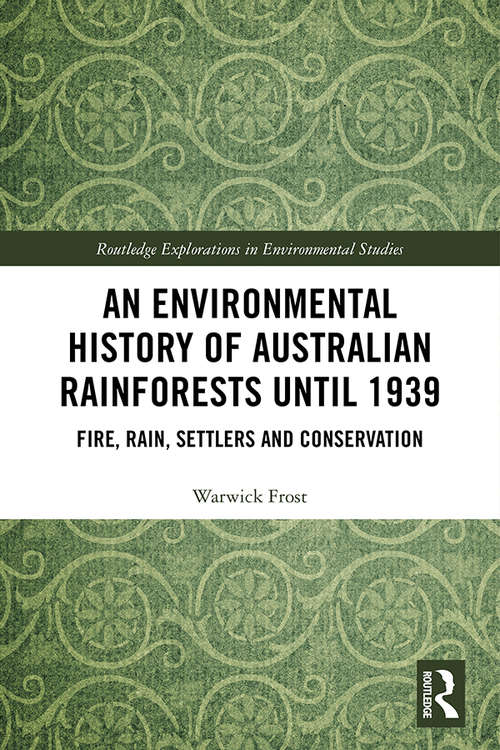 This book provides a comprehensive environmental history of how Australia’s rainforests developed, the influence of Aborigines and pioneers, farmers and loggers, and of efforts to protect rainforests, to help us better understand current issues and debates surrounding their conservation and use.

While interest in rainforests and the movement for their conservation are often mistakenly portrayed as features of the last few decades, the debate over human usage of rainforests stretches well back into the nineteenth century. In the modern world, rainforests are generally considered the most attractive of the ecosystems, being seen as lush, vibrant, immense, mysterious, spiritual and romantic. Rainforests hold a special place; both providing a direct link to Gondwanaland and the dinosaurs and today being the home of endangered species and highly rich in biodiversity.

They are also a critical part of Australia’s heritage. Indeed, large areas of Australian rainforests are now covered by World Heritage Listing. However, they also represent a dissonant heritage. What exactly constitutes rainforest, how it should be managed and used, and how much should be protected are all issues which remain hotly contested. Debates around rainforests are particularly dominated by the contradiction of competing views and uses – seeing rainforests either as untapped resources for agriculture and forestry versus valuing and preserving them as attractive and sublime natural wonders. Australia fits into this global story as a prime example but is also of interest for its aspects that are exceptional, including the intensity of clearing at certain periods and for its place in the early development of national parks.

This book will be of great interest to students and scholars of Environmental History, Australian History and Comparative History.