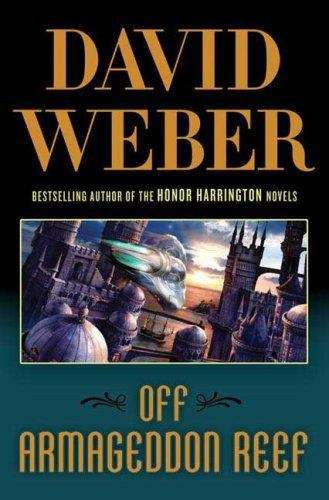 When Dying was the easy part.

The Terran Federation Navy fought desperately for over forty years, but the ruthless species known as the Gbaba slaughtered the human race's extra-Solar colonies one by one. Now the end had finally come; Earth herself lay under siege by an enemy humankind could not defeat.

And so mankind undertook one last throw of the dice: Operation Ark. Earth's final colonizing expedition was meant to build a new civilization, on a planet so distant even the Gbaba might never find it and without the high-tech infrastructure whose emissions might betray its location. To protect and conceal that expedition, the Navy's final fleet was prepared to die to the last ship. Lieutenant Commander Nimue Alban volunteered to serve on the flagship of that fleet, knowing that she and everyone else aboard it would die...which was exactly what happened.

So she was a little surprised to wake up in a cave on a planet called Safehold. She was even more surprised to discover that she'd been dead for eight centuries . . . and that the fanatic administrators of Operation Ark had used mind-control techniques to create a false, brutally suppressive religion in which every single Safeholdian believed-one whose entire purpose was to forbid invention and innovation forever.

Everyone on Safehold knew the Church was the consecrated custodian of God's will. Everyone knew forbidden technology was the work of the Devil. And everyone knew that anyone who dabbled in the forbidden must be destroyed, lest everyone's soul be lost forever to damnation.

But a tiny faction within Operation Ark's leadership remembered the truth and believed in human dignity and freedom. They've left Nimue Alban to oppose that monstrous creation, and they've given her a carefully hidden cache of technology and the capabilities of the android body in which her memories, loves, hopes, and dreams live on. Now it's her job to somehow provoke the technological progress-and freedom of thought and belief-the Church of God Awaiting has worked centuries to crush.

Nimue Alban spent her entire life fighting against the inevitable destruction of her species. Now she's about to discover that dying in humanity's defense was the easy part.