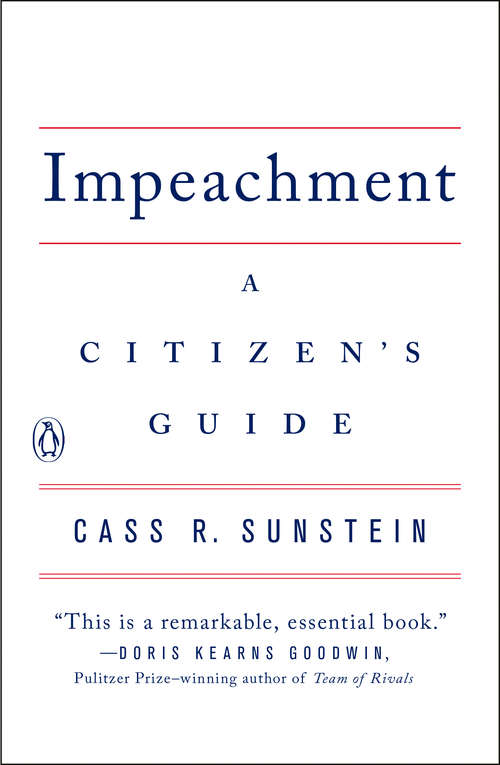 “With insight, wisdom, affection, and concern, Sunstein has written the story of impeachment every citizen needs to know. This is a remarkable, essential book.” —Doris Kearns GoodwinAn essential guide to the impeachment process that rises above politics and goes beyond punditry, from one of America's foremost legal experts, including analysis of the Mueller Report.As Benjamin Franklin famously put it, Americans have a republic, if we can keep it. Preserving the Constitution and the democratic system it supports is the public's responsibility. One route the Constitution provides for discharging that duty--a route rarely traveled--is impeachment.Harvard Law professor Cass R. Sunstein provides a succinct citizen's guide to this essential tool of self-government. Taking us deeper than mere partisan politics, he illuminates the constitutional design behind impeachment and emphasizes the people's role in holding presidents accountable. In spite of the loud national debate between pundits and politicians alike over whether or not to impeach Trump, impeachment remains widely misunderstood. Sunstein identifies and corrects a number of common misconceptions. For example, he shows how the Constitution, not the House of Representatives, establishes grounds for impeachment, and that the president can be impeached for abuses of power that do not violate the law. Even neglect of duty counts among the "high crimes and misdemeanors" delineated in the republic's foundational document. Sunstein describes how impeachment helps make sense of our constitutional order, particularly the framers' controversial decision to install an empowered executive in a nation deeply fearful of kings.With an eye toward the past and the future, Impeachment: A Citizen's Guide considers a host of actual and imaginable arguments for a president's removal, explaining why some cases are easy and others hard, why some arguments for impeachment have been judicious and others not. And with an appendix on the Mueller report, it puts the current national debate in its proper historical context. In direct and approachable terms, it dispels the fog surrounding impeachment so that Americans of all political convictions may use their ultimate civic authority wisely.