Why the Right Went Wrong 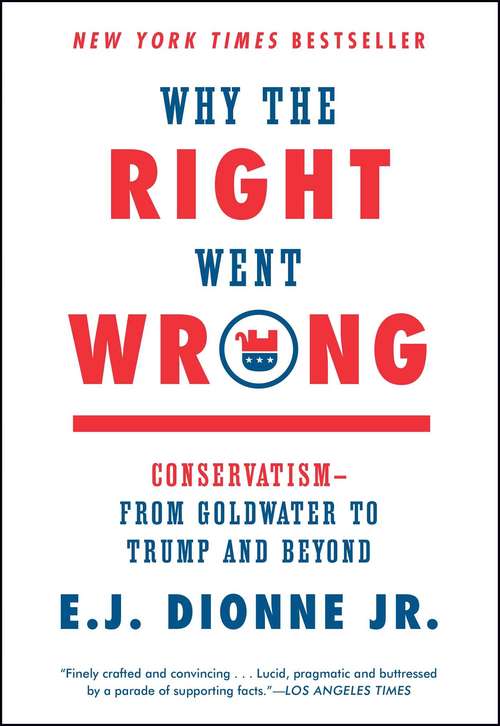 From one of our most engaging political reporters and the author of Why Americans Hate Politics; the story of conservatism from the Goldwater 1960s to the present day Tea Party that has resulted in broken promises and an ideological purity that drives moderate Republicans away.

Why the Right Went Wrong offers a historical view of the right since the 1960s. Its core contention is that American conservatism and the Republican Party took a wrong turn when they adopted Barry Goldwater's worldview during and after the 1964 campaign. The radicalism of today's conservatism is not the product of the Tea Party, Washington Post columnist E.J. Dionne writes. The Tea Partiers are the true heirs to Goldwater ideology. The purity movement did more than drive moderates out of the Republican Party--it beat back alternative definitions of conservatism.

Since 1968, no conservative administration--not Nixon not Reagan not two Bushes--could live up to the rhetoric rooted in the Goldwater movement that began to reshape American politics fifty years ago. The collapse of the Nixon presidency led to the rise of Ronald Reagan, the defeat of George H.W. Bush, to Newt Gingrich's revolution. Bush initially undertook a partial modernization, preaching "compassionate conservatism" and a "Fourth Way" to Clinton's "Third Way." Conservatives quickly defined him as an advocate of "big government" and not conservative enough on spending, immigration, education, and Medicare.

A return to the true faith was the only prescription on order. The result was the Tea Party, which Dionne says, was as much a reaction to Bush as to Obama. The state of the Republican party, controlled by the strictest base, is diminished, Dionne writes. It has become white and older in a country that is no longer that. It needs to come back to life for its own health and that of the country's, and in Why the Right Went Wrong, he explains how.