Louisiana Culture from the Colonial Era to Katrina 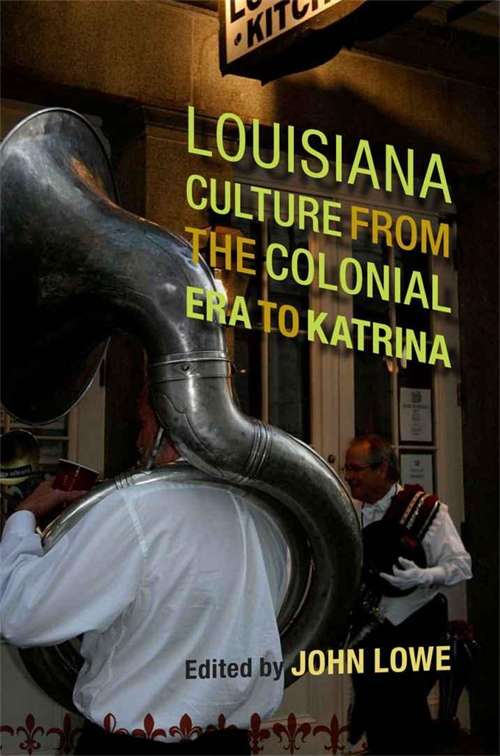 In 1803, President Thomas Jefferson acquired 828,000 square miles of French territory in what became known as the Louisiana Purchase. Although today Louisiana makes up only a small portion of this immense territory, this exceptional state embraces a larger-than-life history and a cultural blend unlike any other in the nation. Louisiana Culture from the Colonial Era to Katrina, a collection of fourteen essays compiled and edited by John Lowe, captures all of the flavor and richness of the state's heritage, illuminating how Louisiana, despite its differences from the rest of the United States, is a microcosm of key national concerns -- including regionalism, race, politics, immigration, global connections, folklore, musical traditions, ethnicity, and hybridity. Divided into five parts, the volume opens with an examination of Louisiana's origins, with pieces on Native Americans, French and German explorers, and slavery. Two very different but complementary essays follow with investigations into the ongoing attempts to define Creoles and creolization. No collection on Louisiana would be complete without attention to its remarkable literary traditions, and several contributors offer tantalizing readings of some of the Pelican State's most distinguished writers -- a dazzling array of artists any state would be proud to claim. The volume also includes pieces on a couple of eccentric mythologies distinct to Louisiana and explorations of Louisiana's unique musical heritage.Throughout, the international slate of contributors explores the idea of place, particularly the concept of Louisiana as the center of the Caribbean wheel, where Cajuns, Creoles, Cubans, Haitians, Jamaicans, and others are part of a New World configuration, connected by their linguistic identity, landscape and climate, religion, and French and Spanish heritage. A poignant conclusion considers the devastating impact of Hurricanes Katrina and Rita and what the storms mean for Louisiana's cultural future. A rich portrait of Louisiana culture, this volume stands as a reminder of why that culture must be preserved.