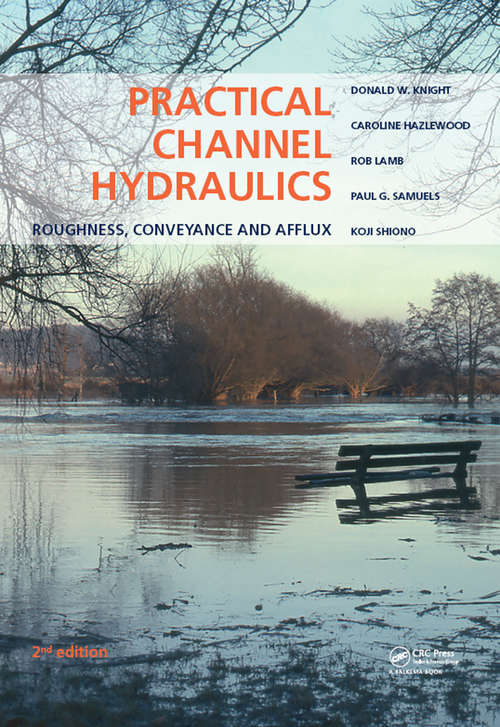 Practical Channel Hydraulics is a technical guide for estimating flood water levels in rivers using the innovative software known as the Conveyance and Afflux Estimation System (CES-AES). The stand alone software is freely available at HR Wallingford’s website www.river-conveyance.net. The conveyance engine has also been embedded within industry standard river modelling software such as InfoWorks RS and Flood Modeller Pro. This 2nd Edition has been greatly expanded through the addition of Chapters 6-8, which now supply the background to the Shiono and Knight Method (SKM), upon which the CES-AES is largely based.

With the need to estimate river levels more accurately, computational methods are now frequently embedded in flood risk management procedures, as for example in ISO 18320 (‘Determination of the stage-discharge relationship’), in which both the SKM and CES feature. The CES-AES incorporates five main components: A Roughness Adviser, A Conveyance Generator, an Uncertainty Estimator, a Backwater Module and an Afflux Estimator. The SKM provides an alternative approach, solving the governing equation analytically or numerically using Excel, or with the short FORTRAN program provided.

Special attention is paid to calculating the distributions of boundary shear stress distributions in channels of different shape, and to appropriate formulations for resistance and drag forces, including those on trees in floodplains. Worked examples are given for flows in a wide range of channel types (size, shape, cover, sinuosity), ranging from small scale laboratory flumes (Q = 2.0 1s-1) to European rivers (~2,000 m3s-1), and large-scale world rivers (> 23,000 m3s-1), a ~ 107 range in discharge. Sites from rivers in the UK, France, China, New Zealand and Ecuador are considered.

Topics are introduced initially at a simplified level, and get progressively more complex in later chapters. This book is intended for post graduate level students and practising engineers or hydrologists engaged in flood risk management, as well as those who may simply just wish to learn more about modelling flows in rivers.