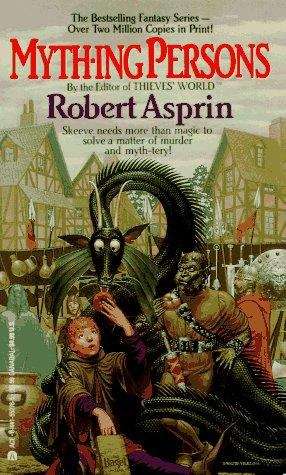 This is the fifth book in Robert Asprin's celebrated comic fantasy series about the lively exploits of an enterprizing magician and his demon mentor,. Skeeve is in a real pickle this time. His partner Aahz has disappeared and it looks like foul play. Finding Aahz ought to be a snap for a

talented magician like Skeeve, especially with a sassy apprentice and a dumb but brawny bodyguard along for the ride.

The trouble is, they're sleuthing in another dimension: a strange and chilly realm where day is night and humans are considered monsters. Add a murder rap, a couple

of vampires, and the fact that magic doesn't work here, and you've got a trio in real hot water-that is, unless Skeeve

finds a different trick up his sleeve!

Here is the order of The Myth Books by Robert Asprin: