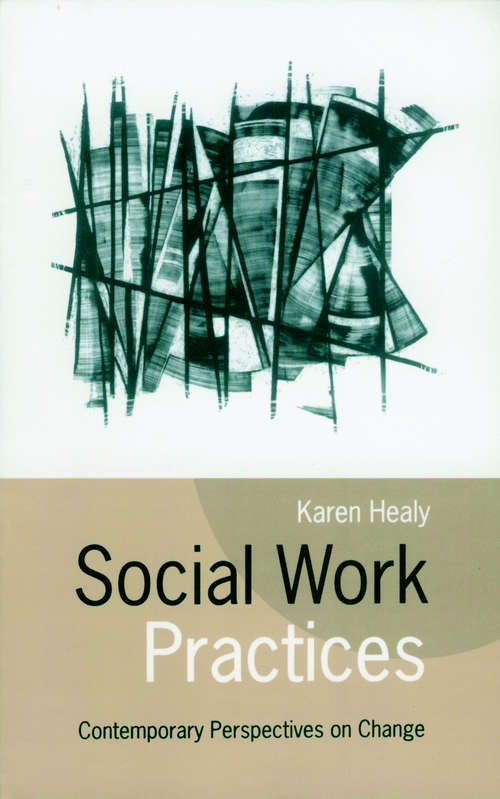 `Karen Healy has written a very interesting and worthwhile book that explores the relevance and significance of postmodern theory to social work. It provides a well-argued account of recent developments in social work theory... However, it is not simply an account of theory, as considerable effort goes into making links between the theory and its implications for practice. ...[I]t offers a sound foundation for exploring issues of theory and practice.

A major strength of the book is that it shows that some of the significant flaws in earlier attempts to develop critical approaches to practice should not lead us to assume that radical approaches are necessarily oppressive in themselves, or doomed to failure...

It should serve its purpose well in prompting educators, policy-makers and practitioners to begin to take on board the critique of dominant approaches to social work theory and to help us guard against the dangers of dogmatism and orthodoxy' - European Journal of Social Work

`Karen Healy profoundly challenges, in the context of the postmodernity of late capitalism, many of the assumptions upon which the critical tradition in social work has been founded. This is a book which interrogates not only the emancipatory metanarratives of left perspectives from her position within the left, but also questions many of the received ideas about her professional power and identity, and about the kinds of social work practices necessary in order to continue to pursue welfare as an emancipatory project under transformed ideological and material circumstances. This is a most significant contribution to the debates which confront social work, worldwide, at the present time' - Peter Leonard, McGill University, Canada

How should social workers be responding to the crises which beset the welfare states of the 21st century? Could postmodern theory provide some of the answers?

This original and stimulating book provides a critical review of contemporary social work theory and considers its relevance for professional practice. Karen Healy outlines critical theoretical perspectives - including feminist, Marxist and radical social work - and indicates their implications for social work practice. She explains contemporary debates on post-structuralism and postmodernism and shows how their application to everyday social work practice would point to a new pragmatism focused on local, contextual and incremental proposals for change. By referring to actual examples, she invites the reader to consider the potential for relevant and diverse forms of social work practice informed by postmodern theory.

This accessible and engaging book makes an important contribution to contemporary debates on social work theory and practice. It will be important reading for students and academics in social work and social policy.