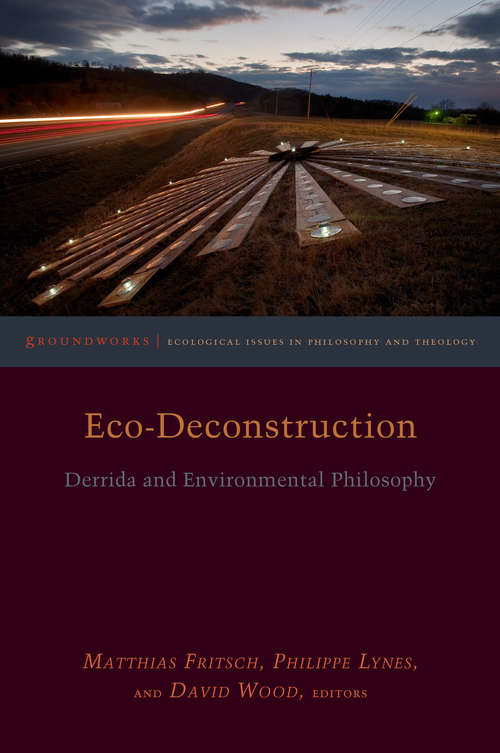 Eco-Deconstruction: Derrida and Environmental Philosophy launches a new mode of philosophical and ethical reflection with respect to the challenges posed by the degradation of the natural environment, including habitat loss, species extinction, and climate change. While the work of French philosopher Jacques Derrida (1930-2004), with its relentless interrogation of the anthropocentric metaphysics of presence, has already proven highly influential in posthumanism and animal studies, the present volume, drawing on published and unpublished work by Derrida and others, builds on these insights in addressing and responding to the most pressing environmental issues of our time. The volume brings together 15 scholars, many of which have achieved world renown, from a wide variety of related fields, including eco-phenomenology, eco-hermeneutics, new materialism, posthumanism, animal studies, vegetal philosophy, science and technology studies, environmental humanities, eco-criticism, earth art and aesthetics, and analytic environmental ethics. Overall, eco-deconstruction offers an account of differential relationality explored in a non-final, non-totalizable ecological context, both quasi-ontologically and quasi-normatively, with attention to diagnosing our times. Accordingly, the book is divided into four sections—Diagnosing the Present, which suggests that our times are marked by a facile, flattened-out understanding of time and thus in need of deconstructive dispositions; Ecologies, which mobilizes the spectral ontology of deconstruction to argue for an originary environmentality, the constitutive ecological embeddedness of mortal life; Nuclear and Other Biodegradabilities, in which contributors reflect on the remains, by-products, and disintegrations of human culture, including nuclear waste, environmental destruction, and species extinctions; and Environmental Ethics, which seeks to uncover a demand for justice, including human responsibility for suffering beings, that emerges precisely as a response to original differentiation, and the mortality and unmasterable alterity it installs in living beings. As such, the book may resonate with readers not only in philosophy, but across the humanities and the social and natural sciences.