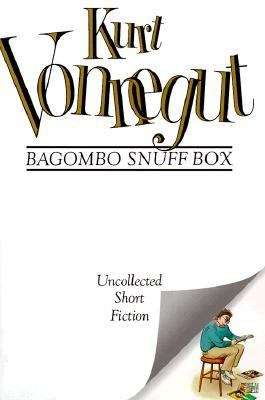 From out of the blue, here's a new collection of Vonnegut

fiction--his first magazine stories from the 1950s in book form

at last, with some charming reminiscences (and three new endings

for old stories) by the author. Vonnegut says these tales were

meant to be as evanescent as lightening bugs, and that image

captures their frail magic. They're like time travelers from an

epoch when stories swarmed in mass-market magazines, before TV

dawned and doomed them.

"Thanasphere" (in which an astronaut encounters dead souls in

space) and the hero's bogus adventures in alien lands in "Bagombo

as do the war stories "Souvenir," "Der Arme Dolmetscher," and

"The Cruise of The Jolly Roger," which incorporate and amplify

of "The No-Talent Kid," "Ambitious Sophomore," and "The Boy Who

Hated Girls," which pretty much nail the high-school marching

band experience. The pieces are peppered with odd, true

observations and neat little turns of phrase: one incompetent kid

in Lincoln High's band marches "flappingly, like a mother

flamingo pretending to be injured, luring alligators from her

You can't miss the ironic humor and the humane, death-haunted

melancholy of the young war veteran and tyro writer. This

Player Piano, and anticipates the masterpiece

Vonnegut is derivative, mostly of Saki and O. Henry, partly

because he couldn't think of endings, and their switcheroos

offered a handy model. But from the start, Vonnegut's