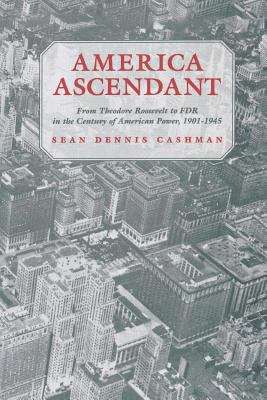 A lively tour of the United States in the first half of the twentieth century, America Ascendant traces the development of America's tremendous industrial power and its commercial deployment, at home and abroad. Emphasizing the contributions of those charismatic presidents who shaped the future of politics-- Theodore Roosevelt, Woodrow Wilson, and Franklin Delano Roosevelt--the book also covers pioneers such as Henry Ford and the Wright brothers, whose technological contributions transformed societies the world over. The book investigates the phenomena that threatened America's ascendance--the Great Red Scare of 1917- 20 and the rout of organized labor, the Great Crash of 1929 and the searing depression years, and the apartheid policies that undermined American democratic ideals. Moreover, Sean Dennis Cashman sets the American story within the dramatic context of the rise and fall of political empires in Europe and Asia and two devastating world wars. Enriching the volume is an integrated account of the American cultural scene, replete with such figures as Ernest Hemingway, Frank Lloyd Wright, George Gershwin, Louis Armstrong, Billie Holiday, Charlie Chaplin, and D. W. Griffith. Imaginatively conceived, America Ascendant once again reveals Sean Dennis Cashman's flair for bringing American history to life with all its triumphs, drama, and ambiguities.