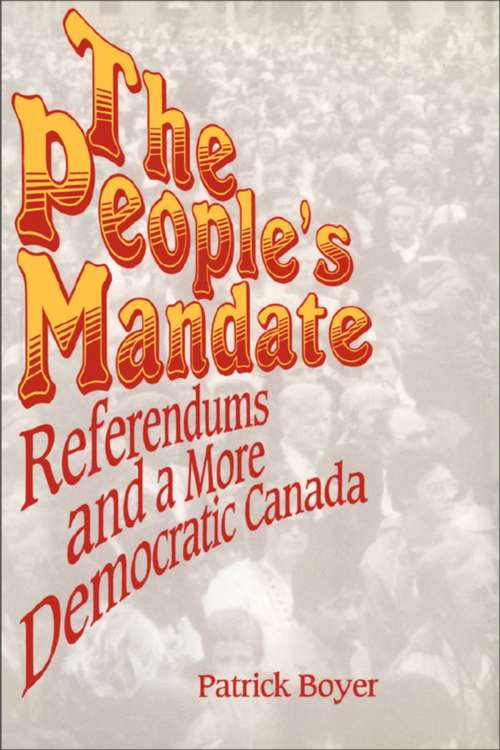 A mood of anger with the political system has been stirring across Canada; yet rather than turning away from the system, many Canadians are actually seeking a greater say in matters that affect them. they want to become more effective participants in the political process. In this timely book, Patrick Boyer examines the important role that direct democracy -- through the occasional use of referendums, plebscites, and inniatives -- can play in concert with our existing institutions of representative democracy. This concept is not alien to our country, says Boyer, pointing to the two national plebiscites (on prohibition of alcohol in 1898 and consciption for overseas military service in 1942), some sixty provincial plebscites (on everything from sovereignty-association to abortion, medicare to women's suffrage, prohibition to ownership of power companies), and several thousand at the municipal level. Direct voting is an important instrument in a truly democratic society, Boyer argues, and it has a more important rold in the current reformation of Canada than some in the comfortable growing governing classes want to admit. In addition to clarifying an issue, it is an educational tool, as the plebiscite campaign becomes a national teach-in. Canadians can become participants, rathe rthan mere spectators, in the major changes and transcending isues that affect the future of our country. The People's Mandate is a helpful guide to understanding the distinctions between plebiscites and referendums in a purely Canadian context. It addresses some of the concerns about this unparliamentary practice, and makes a powerful and logical statement about democracy. In sum, Boyer believes it is essential to govern with the trust of the people.