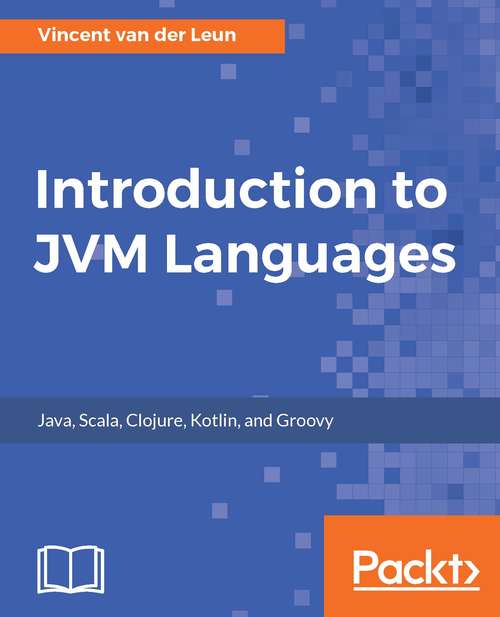 • Filled with practical examples, this book will help you understand the core concepts of Java, Scala, Clojure, Kotlin, and Groovy

This book is meant for programmers who are interested in the Java Virtual Machine (JVM) and want to learn more about the most popular programming languages that can be used for JVM development. Basic practical knowledge of a modern programming language that supports object-oriented programming (JavaScript, Python, C#, VB.NET, and C++) is assumed.

• Understand the popular JVM languages and the Java Class Library

• Get to know about various programming paradigms such as imperative, object-oriented, and functional

• Work with common JVM tools such as Eclipse IDE, Gradle, and Maven

• Explore frameworks such as SparkJava, Vert.x, Akka and JavaFX

• Boost your knowledge about dialects of other well-known programming languages that run on the JVM, including JavaScript, Python, and Ruby

The book will begin with a general introduction of the JVM and its features, which are common to the JVM languages, helping you get abreast with its concepts. It will then dive into explaining languages such as Java, Scala, Clojure, Kotlin, and Groovy and will show how to work with each language, their features, use cases, and pros and cons. By writing example projects in those languages and focusing on each language's strong points, it will help you find the programming language that is most appropriate for your particular needs.

By the end of the book, you will have written multiple programs that run on the Java Virtual Machine and know about the differences between the various languages.

This practical, example-filled guide will help you get started with the JVM and some of its most popular languages.