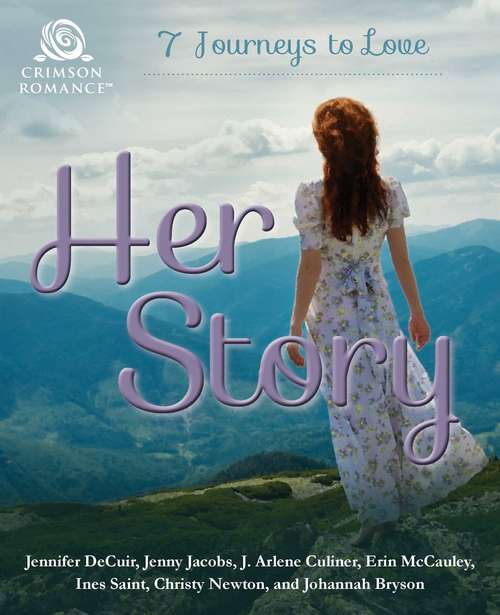 Love is a winding but satisfying road for these seven heroines as they navigate the twists and turns life throws at them.Wynter’s Journey: Tragedy tore Wynter and Sam apart twelve years ago, and now she’s back at his doorstep, widowed, desperately broke, and very pregnant. What’s a nice guy to do but offer her shelter? But living under the same roof quickly leads to old feelings resurfacing, even if Wynter is determined to leave the pain of Scallop Shores behind. Now the one person Sam wanted to forget is the one person he can’t let go. Sadie’s Story: When businessman Jordan Blaise walks into Sadie Rose Perkins’s bookstore, she’s hoping to sell a paperback or two. Instead he asks her to pose as his wife-to-be so he can convince his dying mother he’ll get the happy-ever-after she has always wanted for him. But even Sadie isn’t prepared for the adventure falling in love turns out to be. All About Charming Alice: Quirky Alice Treemont has given up hope of finding love in rural Blake’s Folly, Nevada, where she spends her time rescuing unwanted dogs and protecting the most unloved creatures on earth: snakes. That is, until dashing and well-to-do author Jace Constant comes to town to research his new book. Opposites indeed attract, and soon the whole town is determined to make a love match. The Betrayal: When Marissa Neil’s husband is killed in an accident, she’s asked to not only pick up the pieces of her life but to clean up the mess he left behind. Luckily, her old high school sweetheart, patrolman Jordan Wayne, offers his help. He’d also like a second chance at showing her real love. But the courts grant custody of Marissa’s adopted daughter to another, and she finds herself drowning in deception and lies. Could love cost her her dearest dream? Charmed: Widowed Jamie Sullivan is determined to forge her own success as a goldsmith and raise her twin sons as a single mother. Nick Grey is the gorgeous, charming, and burned-out headmaster of their private elementary school, and he can’t wait to take a year off to travel the world. Their attraction is blazing, but starting over isn’t in the cards for Jamie, and opening his heart is the last thing on Nick’s agenda. Begin Again: Maisie Scott lost her family and will to live during a tornado, and now this small-town waitress won’t let herself get attached to anyone. Then Ryan Tucker, the new veterinarian in town, starts making regular trips to her diner. He craves a happy family more than his Momma’s apple pie, and Maisie could just fill the missing piece in his heart…but Ryan has a big secret that can destroy this bond. Can Maisie move on from the past and learn to begin again? Lake Effect: Shelby Aylesworth knows the pain of losing a real love. She takes refuge on Whiskey Island to try to put her life back together…until Wyeth Packard, one of NYC’s most eligible bachelors, arrives seeking some peace and quiet while he restores an old manor and vineyard. He has long given up on the idea of finding a woman who will love him for who he is, not what he has. Together, they navigate the slippery slope of starting over. Sensuality Level: Sensual