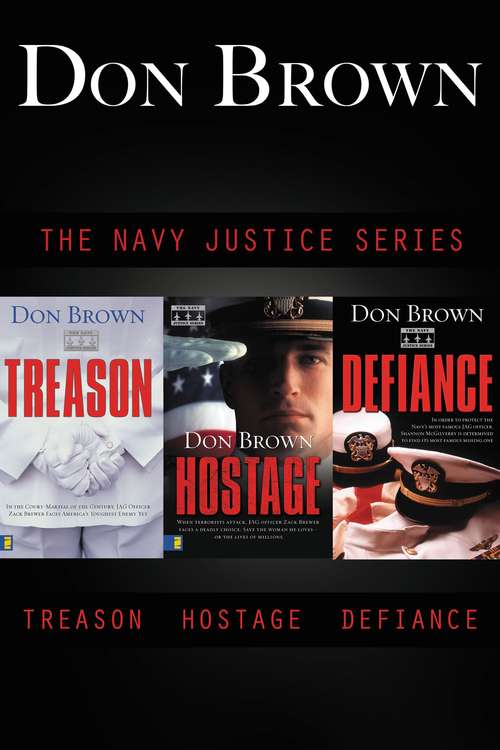 The stakes are high . . . and the entire world is waiting for the verdict. The Navy has uncovered a group of radical Islamic clerics who have infiltrated the Navy Chaplain Corps, inciting sailors and marines to acts of terrorism. And Lieutenant Zack Brewer has been chosen to prosecute them for treason and murder. Only three years out of law school, Zack has already made a name for himself, winning the coveted Navy Commendation medal. Just coming off a high-profile win, this case will challenge the very core of Zack’s skills and his Christian beliefs—beliefs that could cost him the case and his career. With Diane Colcernian, his staunchest rival, as assistant prosecutor, Zack takes on internationally acclaimed criminal defense lawyer Wells Levinson. And when Zack and Diane finally agree to put aside their animosity, it causes more problems than they realize.

Zack Brewer faces a choice. It can prevent the next war. But it will cost the life of the person he loves the most. JAG Officer Zack Brewer’s prosecution of three terrorists posing as Navy chaplains was called the “court martial of the century” by the press. Now, with the limelight behind him, all Zack wants to do is forget. But the radical Islamic organization behind the chaplains has a long memory—and a thirst for revenge. Now the Navy has a need for Zack that eclipses all else. When an unthinkable act of aggression brings Israel and its Arab neighbors to the brink of war, Zack and co-counsel Diane Colcernian are called to the case of a lifetime. As leading nations focus their gaze upon these two, other eyes are watching as well. Zack and Diane are in harm’s way. A kidnapping, an ultimatum…and suddenly, Zack faces an impossible choice. If he loses this case, the world could explode into war. If he wins, his partner—the woman he loves—will die. And Zack himself may not survive to make the decision.

From a murder in Paris to a courtroom in California to a terrorist camp in the Gobi Desert, Don Brown’s follow-up to Treason and Hostage plunges into a suspense-filled journey of danger, duty, and hope. The Commander’s Bodyguard is Shannon McGilverry, a crack NCIS agent assigned to protect Navy JAG Officer Zack Brewer. Zack is being hunted by terrorists, stalked by a psychopath, and is working his way through a perilous, politically-charged trial. When another Navy JAG officer is murdered, it’s clear that Zack is in harm’s way. As his bodyguard, Shannon must do more than protect Zack. She also must set aside her growing feelings for the brilliant attorney and investigate rumors that the love of his life, Diane Colcerninan, may still be alive. Zack finds himself in need of his faith more than ever as Navy SEALS launch a daring rescue attempt that has the potential to trigger World War III.