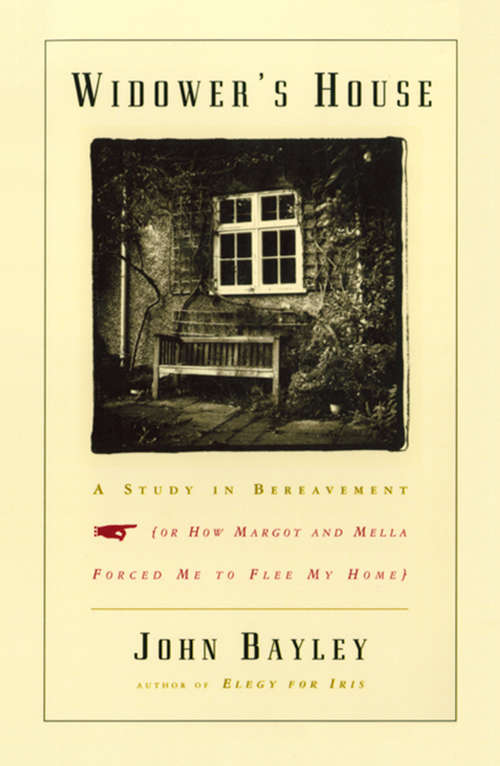 A hilarious comedy of errors and a delightful love story by England's most improbable sex symbol.

Little did retired professor John Bayley realize when he lost Iris Murdoch, his beloved wife of forty-four years, that life would never be the same again. First came thousands of sympathy notes from lovers of Murdoch's novels and fans of Bayley's own poignant memoir, Elegy for Iris. But more alarming were the hundreds of calls from seemingly well-meaning women, many of whom rang Bayley's doorbell in Oxford, bearing cakes, casserole dishes, and delivering pep talks designed to cheer up the widower of their dreams.

Here, in Widower's House: A Study in Bereavement or How Margot and Mella Forced Me to Flee My Home, Bayley tells the painful, inspirational, and ultimately uplifting story of how he had to grapple with his fate as a man by beginning life anew in his mid-seventies. Like millions of other widows and widowers, Bayley, as he relates it, found himself emotionally unprepared for the responsibilities and burdens that confront people who suddenly find themselves alone. He hadn't realized how differently you are treated when you are not part of a couple, and how you must learn to respond to friends, family members, and total strangers in completely different ways.

With the reassuring, compassionate voice of Iris still a mournful obbligato in the background, Bayley describes the pitfalls a widower must face as he ventures out into the newly virgin world beyond his front door. Finding comfort in recording the day-to-day calamities that marked his reentry into the real world, Bayley uses surprising humor--reflected here in the vivid depictions of his new suitors, Margot and Mella--to get him through his darkest days.

Melodic, irrepressible, and comically comforting, Widower's House, with its heartwarming and surprisingly romantic ending, will reveal yet a new side of the man who has become England's most unlikely symbol of masculine virility.