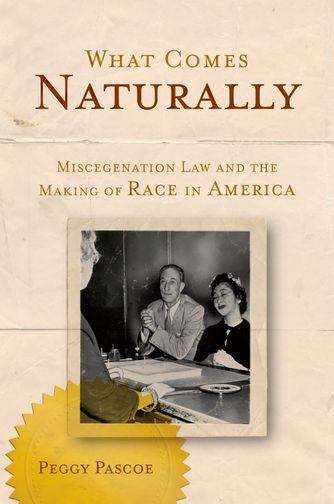 A long-awaited history that promises to dramatically change our understanding of race in America, What Comes Naturally traces the origins, spread, and demise of miscegenation laws in the United States-laws that banned interracial marriage and sex, and which were enacted and applied not just in the South but throughout most of the country, in the West, the North, and the Midwest. Beginning in the Reconstruction era, when the term miscegenation first was coined, Peggy Pascoe traces the creation of a racial hierarchy that bolstered white supremacy and banned the marriage of Whites to Chinese, Japanese, Filipinos, and American Indians, as well as the marriage of Whites to Blacks. She takes readers into the lost world of miscegenation law, showing how legislators, lawyers, and judges used ideas about gender and sexuality to enact and enforce miscegenation laws. Judges labeled interracial marriages "unnatural," marriage license clerks made them seem statistically invisible, and newspaper reporters turned them into sensational morality tales. Taken together, their actions embedded a multiracial version of white supremacy deep in the heart of the modern American state. Pascoe ends not simply with the landmark 1967 case of Loving v. Virginia, in which the U. S. Supreme Court finally struck down miscegenation laws, but with a look at the implications of the ideal of colorblindness that replaced them. Moving effortlessly from the lives of interracial couples, the politicking of the NAACP, and the outraged objections of Filipino immigrants to the halls of state legislatures and rulings of the Supreme Court, What Comes Naturally transcends older interpretations of bans on interracial marriage as a southern story in black and white to offer a stunning account of the national scope and multiracial breadth of America's tragic history of miscegenation laws.