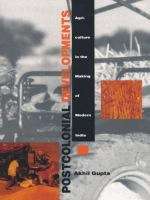 This definitive study brings together recent critiques of development and work in postcolonial studies to explore what the postcolonial condition has meant to rural people in the Third World. Focusing on local-level agricultural practices in India since the "green revolution" of the 1960s, Akhil Gupta challenges the dichotomy of "developed" and "underdeveloped," as well as the notion of a monolithic postcolonial condition. In so doing, he advances discussions of modernity in the Third World and offers a new model for future ethnographic scholarship. Based on fieldwork done in the village of Alipur in rural north India from the early 1980s through the 1990s, Postcolonial Developments examines development itself as a post-World War II sociopolitical ideological formation, critiques related policies, and explores the various uses of the concept of the "indigenous" in several discursive contexts. Gupta begins with an analysis of the connections and conflicts between the world food economy, transnational capital, and technological innovations in wheat production. He then examines narratives of village politics in Alipur to show how certain discourses influenced governmental policies on the green revolution. Drawing links between village life, national trends, and global forces, Gupta concludes with a discussion of the implications of environmentalism as exemplified by the Rio Earth Summit and an examination of how global environmental treaties may detrimentally affect the lives of subaltern peoples. With a series of subtle observations on rural politics, nationalism, gender, modernization, and difference, this innovative study capitalizes on many different disciplines: anthropology, sociology, comparative politics, cultural geography, ecology, political science, agricultural economics, and history.