At Home in the World 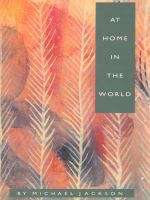 Ours is a century of uprootedness, with fewer and fewer people living out their lives where they are born. At such a time, in such a world, what does it mean to be "at home?" Perhaps among a nomadic people, for whom dwelling is not synonymous with being housed and settled, the search for an answer to this question might lead to a new way of thinking about home and homelessness, exile and belonging. At Home in the World is the story of just such a search. Intermittently over a period of three years Michael Jackson lived, worked, and traveled extensively in Central Australia. This book chronicles his experience among the Warlpiri of the Tanami Desert.Something of a nomad himself, having lived in New Zealand, Sierra Leone, England, France, Australia, and the United States, Jackson is deft at capturing the ambiguities of home as a lived experience among the Warlpiri. Blending narrative ethnography, empirical research, philosophy, and poetry, he focuses on the existential meaning of being at home in the world. Here home becomes a metaphor for the intimate relationship between the part of the world a person calls "self" and the part of the world called "other." To speak of "at-homeness," Jackson suggests, implies that people everywhere try to strike a balance between closure and openness, between acting and being acted upon, between acquiescing in the given and choosing their own fate. His book is an exhilarating journey into this existential struggle, responsive at every turn to the political questions of equity and justice that such a struggle entails.A moving depiction of an aboriginal culture at once at home and in exile, and a personal meditation on the practice of ethnography and the meaning of home in our increasingly rootless age, At Home in the World is a timely reflection on how, in defining home, we continue to define ourselves.