Skating with the Statue of Liberty 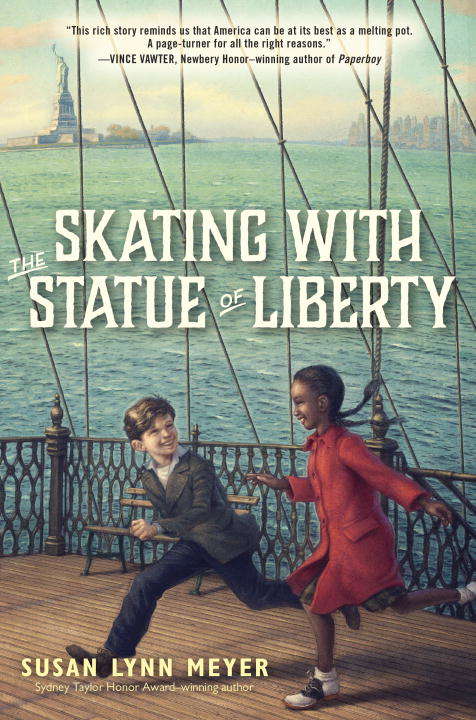 "This rich story reminds us that America can be at its best as a melting pot. A page-turner for all the right reasons."--VINCE VAWTER, Newbery Honor-winning author of Paperboy In this gripping and poignant companion to Sydney Taylor Honor Award winner Black Radishes, Gustave faces racism and anti-Semitism in New York City during World War II, but ultimately finds friendship and hope. It is January 1942, and Gustave, a twelve-year-old Jewish boy, has made it to America at last. After escaping with his family from Nazi-occupied France, after traveling through Spain and Portugal and across the Atlantic Ocean, he no longer has to worry about being captured by the Germans. But life is not easy in America, either. Gustave feels out of place in New York. His clothes are all wrong, he can barely speak English, and he is worried about his best friend, Marcel, who is in grave danger back in France. Then there is September Rose, the most interesting girl in school, who for some reason doesn't seem to want to be friends with him. Gustave is starting to notice that not everyone in America is treated equally, and his new country isn't everything he'd expected. But he isn't giving up.A Junior Library Guild Selection"I love everything about this poignant story, especially the gorgeous prose, which brings to life such an important slice of American history in a way I haven't seen before. Simply put, this heartfelt book is a masterpiece."--SHANA BURG, author of A Thousand Never Evers and Laugh with the Moon"The everyday details of the story guide readers, allowing them to enjoy following Gustave's entry into the United States and his growth toward appreciating all that's ahead for him in his new home. . . . Strong historical content, rich descriptions, and smart subtleties about the links between history and current events."--School Library Journal "[Small] moments add up, and readers may gradually start to think of the characters as close friends. The later chapters of the book involve real danger. . . . And by then, the conflict might feel like it's happening to people the readers have always known. A sweet book that readers will find sneaks up on them."--Kirkus Reviews Praise for Black Radishes A Sydney Taylor Honor Award Winner A Bank Street College of Education Best Children's Book of the Year An Instructor Magazine Best Kids' Book, Historical Fiction A Massachusetts Book Award Must-Read Book "An empowering, suspenseful story of a unique young boy with cunning, patience, and courage." --Francisco X. Stork, author of Marcelo in the Real World "A fascinating, deftly gripping tale that reminds readers, young or old, of events we must never forget." --Zilpha Keatley Snyder, three-time Newbery Honor winner and author of The Egypt Game "A vivid and moving story about a Jewish family's efforts to escape the Nazis, seen through the eyes of a clear-signed and sensitive young boy." --Annika Thor, winner of the Mildred L. Batchelder Award "Black Radishes transforms the past into a gripping story." --Kit Pearson, winner of the Governor General's Award for Awake and DreamingFrom the Hardcover edition.