The Drawing of the Three 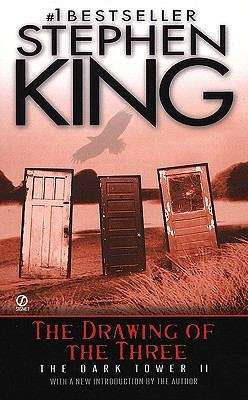 In 1978, Stephen King introduced the world to the last gunslinger, Roland of Gilead. Nothing has been the same since. More than twenty years later, the quest for the Dark Tower continues to take readers on a wildly epic ride. Through parallel worlds and across time, Roland must brave desolate wastelands and endless deserts, drifting into the unimaginable and the familiar. A classic tale of colossal scope--crossing over terrain from The Stand, The Eyes of the Dragon, Insomnia, The Talisman, Black House, Hearts in Atlantis, 'Salem's Lot, and other familiar King haunts--the adventure takes hold with the turn of each page.And the tower awaits....The Second Volume in the Epic Dark Tower Series...The Drawing of the ThreeWhile pursuing his quest for the Dark Tower through a world that is a nightmarishly distorted mirror image of our own, Roland is drawn through a mysterious door that brings him into contemporary America.Here he links forces with the defiant young Eddie Dean, and with the beautiful, brilliant, and brave Odetta Holmes, in a savage struggle against underworld evil and otherworldly enemies.Once again, Stephen King has masterfully interwoven dark, evocative fantasy and icy realism.