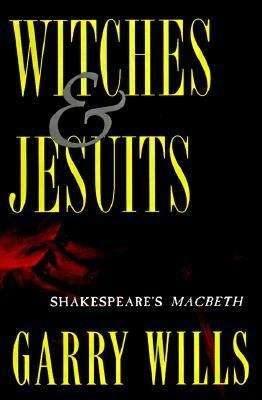 In Witches and Jesuits, Wills focuses on a single document to open up a window on an entire society. He begins with a simple question: If Macbeth is such a great tragedy, why do performances of it so often fail? After all, the stage history of Macbeth is so riddled with disasters that it has created a legendary curse on the drama. Superstitious actors try to evade the curse by referring to Macbeth only as "the Scottish play," but production after production continues to soar in its opening scenes, only to sputter towards anticlimax in the later acts. By critical consensus there seems to have been only one entirely successful modern performance of the play, Laurence Olivier's in 1955, and even Olivier twisted his ankle on opening night. But Olivier's ankle notwithstanding, Wills maintains that the fault lies not in Shakespeare's play, but in our selves. Drawing on his intimate knowledge of the vivid intrigue and drama of Jacobean England, Wills restores Macbeth's suspenseful tension by returning it to the context of its own time, recreating the burning theological and political crises of Shakespeare's era. He reveals how deeply Macbeth's original 1606 audiences would have been affected by the notorious Gunpowder Plot of 1605, when a small cell of Jesuits came within a hairbreadth of successfully blowing up not only the King, but the Prince his heir, and all members of the court and Parliament. Wills likens their shock to that endured by Americans following Pearl Harbor or the Kennedy assassination. Furthermore, Wills documents, the Jesuits were widely believed to be acting in the service of the Devil, and so pervasive was the fear of witches that just two years before Macbeth's first performance, King James I added to the witchcraft laws a decree of death for those who procured "the skin, bone, or any other part of any dead person--to be employed or used in any manner of witchcraft, sorcery, charm, or enchantment." We see that the treason and necromancy in Macbeth were more than the imaginings of a gifted playwright--they were dramatizations of very real and potent threats to the realm. In this new light, Macbeth is transformed. Wills presents a drama that is more than a well-scripted story of a murderer getting his just penalty, it is the struggle for the soul of a nation. The death of a King becomes a truly apocalyptic event, and Malcolm, the slain King's son, attains the status of a man defying cosmic evil. The guilt of Lady Macbeth takes on the Faustian aspect of one who has singed her hands in hell. The witches on the heath, shrugged off as mere symbols of Macbeth's inner guilt and ambition by twentieth century interpreters, emerge as independent agents of the occult with their own (or their Master's) terrifying agendas. Restoring the theological politics and supernatural elements that modern directors have shied away from, Wills points the way towards a Macbeth that will finally escape the theatrical curse on "the Scottish play." Rich in insight and a joy to read, Witches and Jesuits is a tour de force of scholarship and imagination by one of our foremost writers, essential reading for anyone who loves the language.