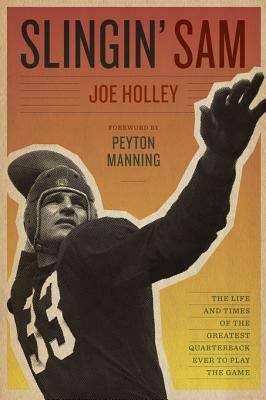 Dan Jenkins calls him "the greatest quarterback who ever lived, college or pro. " Slingin' Sammy Baugh, who played for TCU and the Washington Redskins, single-handedly revolutionized the game of football. While the pros still wore leather helmets and played the game more like rugby, Baugh's ability to throw the ball with rifle-like accuracy made the forward pass a strategic weapon, not a desperation heave. Like Babe Ruth, who changed the very perception of how baseball is played, Slingin' Sam transformed the notion of offense in football and how much yardage can be gained through the air. As the first modern quarterback, Baugh led the Redskins to five title games and two NFL championships, while leading the league in passing six times-a record that endures to this day-and in punting four times. In 1943, the triple-threat Baugh also scored a triple crown when he led the league in passing, punting, and interceptions. Slingin' Sam is the first major biography of this legendary quarterback, one of the first inductees into the Pro Football Hall of Fame. Joe Holley traces the whole arc of Baugh's life (1914-2008), from his small-town Texas roots to his college ball success as an All-American at TCU, his brief flirtation with professional baseball, and his stellar career with the Washington Redskins (1937-1952), as well as his later career coaching the New York Titans and Houston Oilers and ranching in West Texas. Through Holley's vivid descriptions of close-fought games, Baugh comes alive both as the consummate all-around athlete who could play every minute of every game, on both offense and defense, and as an all-around good guy.