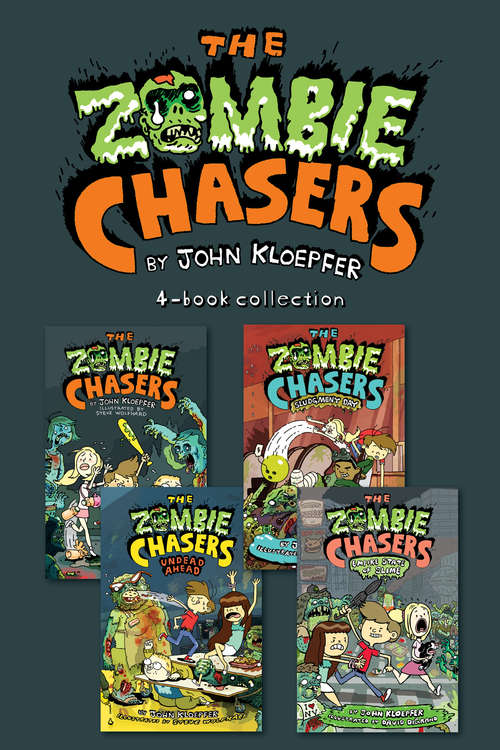 Perfect for fans of Diary of a Wimpy Kid and The Strange Case of Origami Yoda, John Kloepfer's hilarious and stomach-churning Zombie Chasers tween series is overflowing with uproarious middle school humor, dead-on illustrations, and high-action adventure that will leave readers moaning for more. This collection contains the first four books in the series.The Zombie Chasers: Zombie Attack! When brain-gobbling zombies invade, a sleep¬over at Zack Clarke's house quickly turns into a Level-3 creep-over. The undead have infested the streets, filling the air with deathly moans and the stench of rotting flesh. The Zombie Chasers are on a mission to save the world, but first they have to survive their flesh-eating, half-dead neighbors--and one another.The Zombie Chasers #2: Undead Ahead: Zack's sister is a zombie and his parents might be goners. Rice has uncovered the source of the zombie outbreak, and Madison's health-drink habit may be the key to a cure. Ozzie, the newest zombie chaser, is a nunchaku-wielding, monster-fighting machine who's ready to kick some undead butt. The whole country--from their parents to the president--is counting on them. Can the Zombie Chasers save the nation from brain-gobbling ghouls? Or will the US of A become the US of Z?The Zombie Chasers #3: Sludgment Day: Zack and his crew of Zombie Chasers--Rice, Madison, Ozzie, and Zoe--are ready to end this nightmare once and for all! With the antidote in hand, the gang sets off on a wild cross-country road trip to defeat the evil genius behind the zombie apocalypse.The Zombie Chasers #4: Empire State of Slime: Six months after Zack Clarke, his sister, Zoe, and pals Rice, Ozzie, and Madison saved the country from brain-gobbling ghouls, life is finally heading back to normal. But while the kids are busy exploring the Big Apple's sites on a class trip to New York City, things go from sublime to slime when millions of people suddenly rezombify! The Zombie Chasers are back on undead duty, but can they escape the crowded city streets and find a new cure, or is Z-Day here to stay?