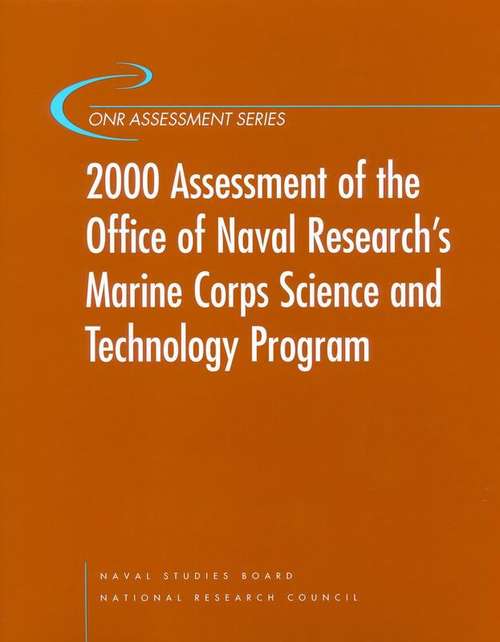 By: National Research Council • Naval Studies Board • Commission on Physical Sciences, Mathematics, and Applications • Division on Engineering and Physical Sciences • Committee for the Review of ONR's Marine Corps Science and Technology Program
Login
Sign Up

This review of the Science and Technology (S&T) program of the Office of Naval Research's (ONR's) Expeditionary Warfare Operations Technology Division, Code 353, comes at a time of considerable change in the Marine Corps and in ONR, which are currently in the midst of significant transitions. The Marine Corps is making plans to equip and train for engaging in a new style of warfare known as Operational Maneuver From the Sea (OMFTS) and for performing a wide variety of missions in urban settings, ranging from humanitarian assistance to combat and mixes of these suggested by the term three-block war. During 1999, ONR assumed management of that portion of the Marine Corps S&T program that had not been assigned several years earlier to the Marine Corps Warfighting Laboratory (MCWL). In 2002, control of most of ONR's advanced development funding (6.3), and of much of its exploratory development funding (6.2), will move from ONR's line divisions, of which Code 353 is one of many, to 12 new program offices, each dedicated to demonstrating technologies for future naval capabilities (FNCs). Given these changes, it is not surprising that some of the projects inherited recently by ONR, and assessed by the Committee for the Review of ONR's Marine Corps Science and Technology Program under the auspices of the Naval Studies Board of the National Research Council, differed from the customary ONR project and were more akin to preacquisition or acquisition support than to S&T. It is also not surprising that Code 353 could not articulate its plans for future investments clearly and concisely, given the current uncertainty about the content of and funding level for FNCs. The Marine Corps S&T program supports the five imperatives for technology advancement that the Marine Corps Combat Development Command (MCCDC) has identified as prerequisites for the transition to OMFTS: maneuver, firepower, logistics, training and education, and command and control. The committee supports investment in these areas and, in the report's discussions and recommendations, follows the five imperatives.

Copyright:
2000 the National Academy of Sciences.