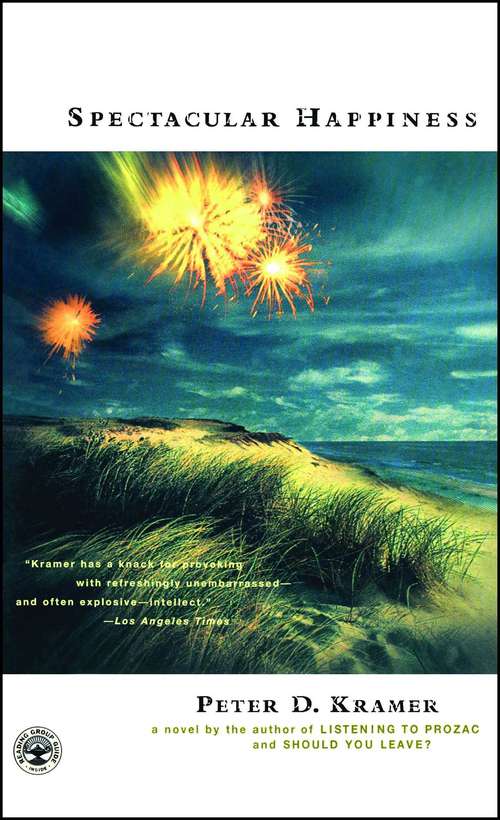 In his bestselling Listening to Prozac, Peter Kramer asked how much happiness we have a right to expect, and how quickly we should demand it. In Should You Leave? he questioned whether trading up has replaced loyalty in intimate relationships. Critics have praised his intellect and writing, comparing him to Roth and Updike, and have anticipated his turn to fiction. Now Kramer has made that transition. Spectacular Happiness is a daring, controversial novel about what constitutes the good life. Chip Samuels is a community college teacher and handyman on Cape Cod, loyal to the radical values his wife, Anais, introduced him to in the sixties. A patient husband and, above all, a loving father, his world has been shattered by Anais's decision to run off with their son in search of a more conventional life devoted to getting and spending. Spectacular Happiness opens when Chip is named as the chief suspect in a series of anarchist bombings of beachfront trophy homes. Meticulously planned, announced with fireworks, these explosions have caught the public imagination, and the irony is that Chip, now an outlaw-celebrity, is drawn into the publicity-based culture he is aiming to disrupt. His response: to assemble a memoir for his estranged son, a father's attempt to explain his motivations before the media distorts them. Chip has splendid allies: Sukey Kuykendahl, an upper-class Realtor with weaknesses for alcohol and overbearing men; Wendy Moro, a self-effacing defense attorney thrust into the limelight; and Manny Abelman, an aging psychotherapist disenchanted with his profession. But it is Chip's own voice that dominates the novel, concerned, searching, painfully aware of the absurd behaviors love can demand. Darkly intelligent, Spectacular Happiness will alter the way we look both at oversized beachfront mansions and at the culture that spawns them, the culture Chip calls the society of the spectacle. Provocative, compelling, stunning in its execution, this is the masterful first novel that Kramer's nonfiction has led his readers and reviewers to expect.