A Murder in Mayfair 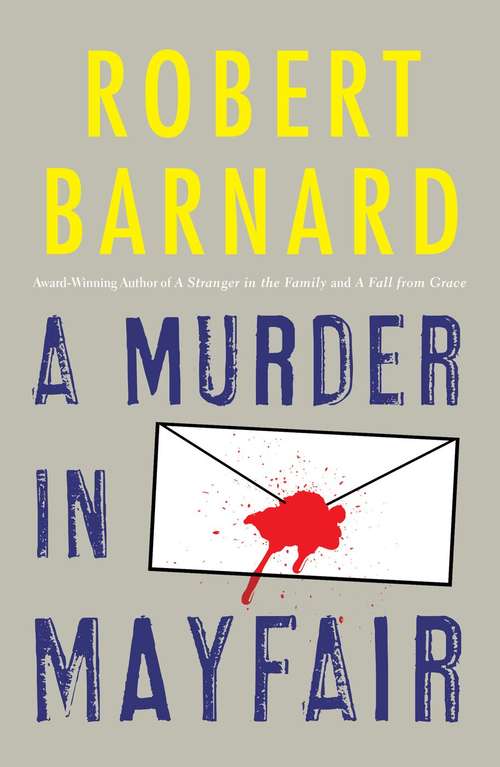 Mystery readers everywhere cherish their favorites among Robert Barnard's critically acclaimed body of work, but one title high on most lists is "A Scandal in Belgravia." "With A Murder in Mayfair," Barnard gives us a compelling new story set in the same intriguing London milieu, where power, politics, and personality make a lethal mix.

When Colin Pinnock becomes a junior minister in the new Prime Minister's government, he's understandably thrilled. Still a youngish man, with a shining reputation among his colleagues, he's clearly being groomed for even higher office. Messages of congratulations flow in from near and far.

Basking in the greetings and the praise, Colin picks one soiled postcard out of the stack of congratulatory missives. "Who Do You Think You Are?" it asks. Who wrote the card? How did the person know his home address? Does the writer think Colin is getting a big head, or do the words carry a more profound meaning? And, taking the question literally, who, indeed, "is" Colin? Who were his real parents? What were the circumstances of his birth?

He had a happy childhood in the north of England, but he now recalls some clues that he might have been adopted. His mother is dead and his father is too senile to offer any help on family history. He'll have to find his answers on his own.

Even more puzzling, perhaps, than Colin's origins, is a top civil servant's shocked response when she first encounters him. Whose image does she see in Colin's face, and what possible link does Colin have to an infamous crime of the past? Faced with additional threatening messages that seem to come from somebody who knows his every movement, Colin begins an urgent investigation into his past and a dangerous search for his tormentor.

In a richly textured novel that takes us from the precincts of the powerful to a simple cottage in remotest Ireland, Robert Barnard spins an intricate tale of love and obsession that once again places him among the premier crime writers of our era.