Whatever Happened to the Washington Reporters, 1978-2012 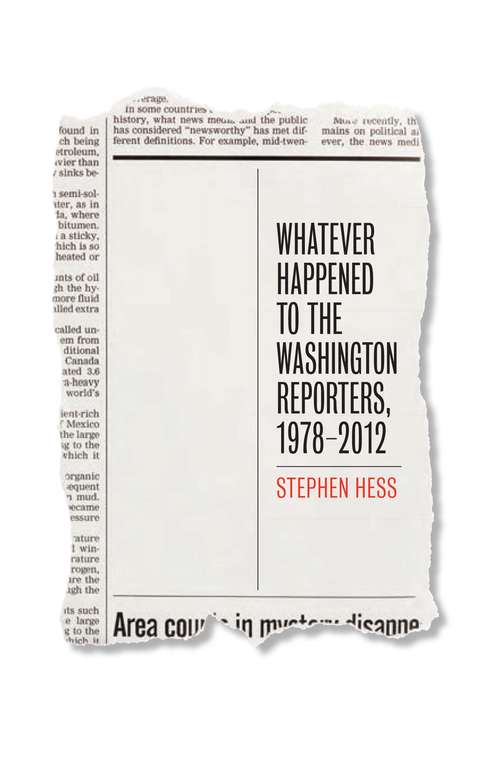 Whatever Happened to the Washington Reporters, 1978-2012, is the first book to comprehensively examine career patterns in American journalism. In 1978 Brookings Senior Fellow Stephen Hess surveyed 450 journalists who were covering national government for U.S. commercial news organizations. His study became the award-winning The Washington Reporters (Brookings, 1981), the first volume in his Newswork series. Now, a generation later, Hess and his team from Brookings and the George Washington University have tracked down 90 percent of the original group, interviewing 283, some as far afield as France, England, Italy, and Australia.What happened to the reporters within their organizations? Did they change jobs? Move from reporter to editor or producer? Jump from one type of medium to another--from print to TV? Did they remain in Washington or go somewhere else? Which ones left journalism? Why? Where did they go?A few of them have become quite famous, including television correspondents Ted Koppel, Sam Donaldson, Brit Hume, Carole Simpson, Judy Woodruff, and Marvin Kalb; some have become editors or publishers of the New York Times, Wall Street Journal, Chicago Tribune, Miami Herald, or Baltimore Sun; some have had substantial careers outside of journalism. Most, however, did not become household names.The book is designed as a series of self-contained essays, each concentrating on one characteristic, such as age, gender, or place of employment, including newspapers, television networks, wire services, and niche publications. The reporters speak for themselves. When all of these lively portraits are analyzed--one by one--the results are surprisingly different from what journalists and sociologists in 1978 had predicted.