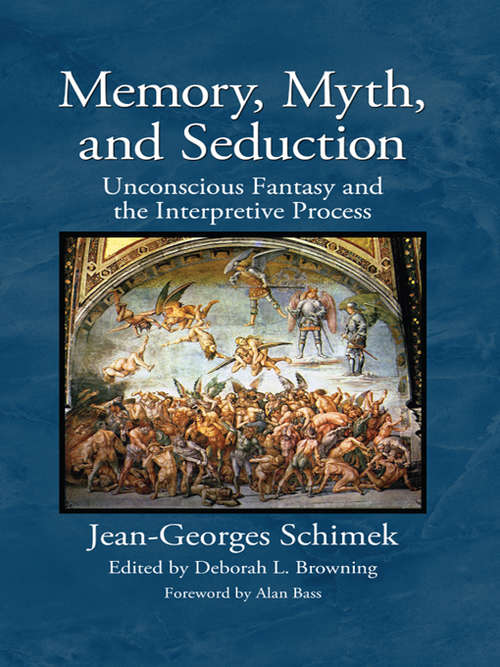 Memory, Myth, and Seduction reveals the development and evolution of Jean-Georges Schimek's thinking on unconscious fantasy and the interpretive process derived from a close reading of Freud as well as contemporary psychoanalysis. Contributing richly to North American psychoanalytic thought, Schimek challenges local views from the perspective of continental discourse. A practicing psychoanalyst, teacher, and consummate Freud scholar, Schimek sought to clarify Freud's concepts and theories and to disentangle complexities borne of inconsistencies in Freud's assumptions and expositions.

This book is divided thematically into three sections. The first concerns fantasy and interpretation as they play out in the analytic situation, and the manner in which analyst and patient coconstruct meaning and reconstruct and recover memory. The second consists of two seminal papers which provide the sequence of steps in the five revisions in Freud's seduction theory. Schimek's careful scholarship lays out the data of Freud's writing, which allows one to draw one's own conclusions about the implications of the changes in the theory that he made. In the third, more theoretical section, he provides a foundation for understanding many of today's discussions about unconscious fantasy, dreaming, remembering, consciousness, affect, self-reflection, mentalization, and implicit relational knowing. He clarifies and illustrates Freud's original formulations (and their inherent problems) through a careful reading of sections of The Interpretation of Dreams, and a study of Freud's famous Signorelli parapraxis.

Skillfully arranged and carefully edited by Deborah Browning and including a foreword by Alan Bass, this collection of Schimek's published and unpublished papers will be of interest to practicing psychoanalysts, psychoanalytically-oriented psychotherapists, and students of the history of ideas and philosophy who have a particular interest in fantasy, interpretation, and Freud.