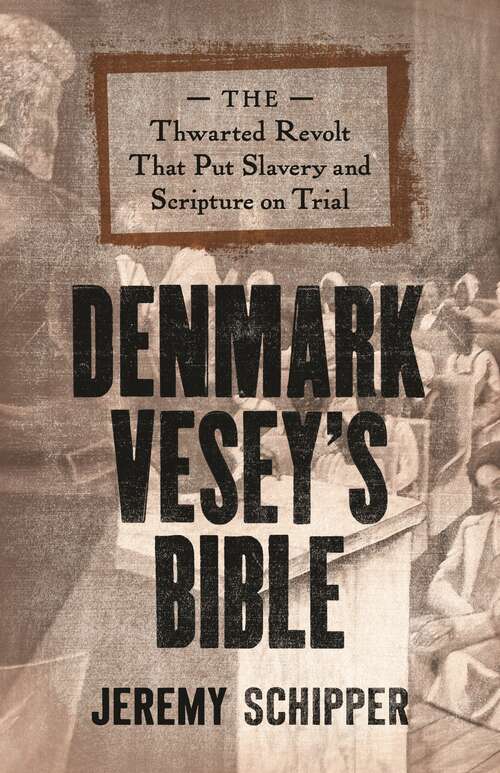 A timely and provocative account of the Bible’s role in one of the most consequential episodes in the history of slaveryOn July 2, 1822, Denmark Vesey, a formerly enslaved man, was hanged in Charleston, South Carolina. He was convicted of plotting what might have been the largest insurrection against slaveholders in US history. Witnesses claimed that Vesey appealed to numerous biblical texts to promote and justify the revolt. While sentencing Vesey to death, Lionel Henry Kennedy, a magistrate at the trial, accused Vesey not only of treason but also of “attempting to pervert the sacred words of God into a sanction for crimes of the blackest hue.” Denmark Vesey’s Bible tells the story of this momentous trial, examining the role of scriptural interpretation in the deadly struggle against American white supremacy and its brutal enforcement.Jeremy Schipper brings the trial and its aftermath vividly to life, drawing on court documents, personal letters, sermons, speeches, and editorials. He shows how Vesey compared people of African descent with enslaved Israelites in the Bible, while his accusers portrayed plantation owners as benevolent biblical patriarchs responsible for providing religious instruction to the enslaved. What emerges is an explosive portrait of an antebellum city in the grips of racial terror, violence, and contending visions of biblical truth.Shedding light on the uses of scripture in America’s troubled racial history, Denmark Vesey’s Bible draws vital lessons from a terrible moment in the nation’s past, enabling us to confront racism and religious discord today with renewed urgency and understanding.