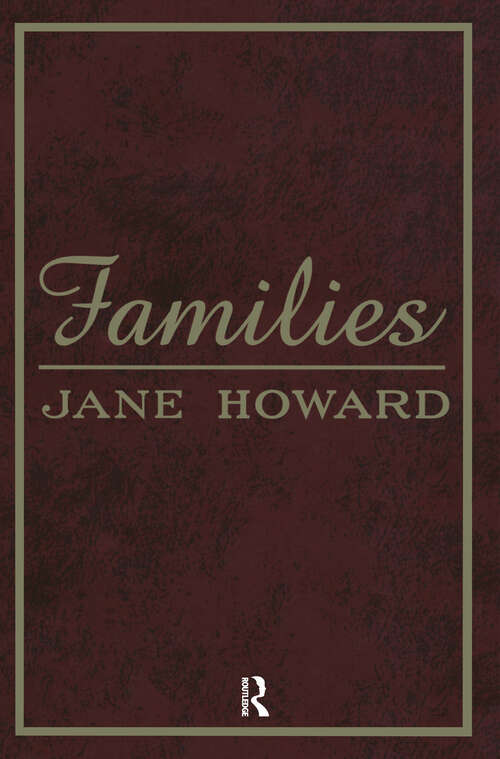 In 'Families' Jane Howard informally visits many dozens of families and tries to discover what makes the best ones work so well. Families are not dying, she finds, although they are evolving in various ways. From the tightest-knit nuclear family or extended clan to the most fragile new commune, the family in one guise or another remains everybody's most basic hold on reality. We may run away from our families as many do, but no sooner do we escape than we find another one, often very much like it. Sympathetically, with immense thrust, she crosses the continent to discover families' myths, jokes, and rituals. She leafs through their scrapbooks, sits on their porches, and takes part, when she can, in their feasts and celebrations. She talks to a father of eighteen, several double first cousins, stepchildren, multiple godmothers, an honorary relative of an Indian tribe, and a nine-year-old boy who has no family but his mother. She sits with a matriarch on the front stoop of a ghetto house, goes camping with a family in Mexico, has Thanksgiving with another in Iowa, and orders pizza with a Greek clan in Massachusetts. Howard reports on visits to conventional Southern and Jewish households and to innovative ones whose members, lacking a common history, plan on building common futures as if water were after all as thick as blood. She examines the notion that "there are ways and ways of achieving kinship, of which birth and marriage are only the most obvious." Millions of clans and families all over the United States continue to celebrate, quarrel, disband, reunite, and endure. Jane Howard makes us realize how our lives are interwoven both with the families we are born into and with those we invent as we go through life. 'Families' is compassionate, provocative, and profound. The paperback edition of this important work will be essential reading for all those with an interest in the study of familial bonds, particularly sociologists, anthropologists, and psychologists.