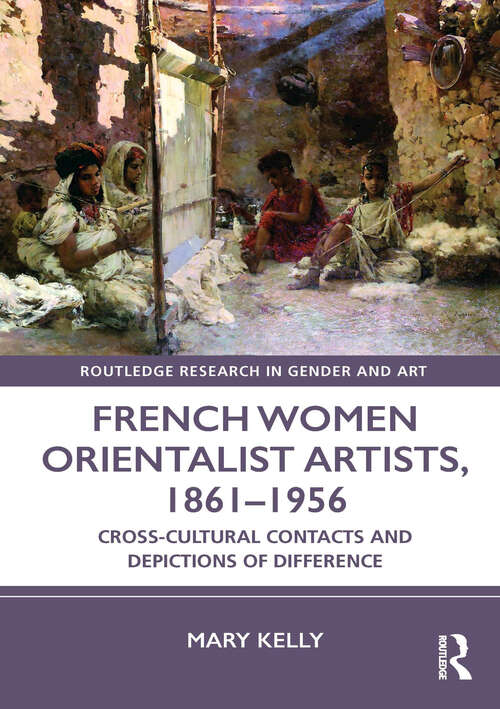 This book is the first full-length study dedicated to French women Orientalist artists.

Mary Kelly has gathered primary documentation relating to seventy-two women artists whose works of art can be placed in the canon of French Orientalism between 1861 and 1956. Bringing these artists together for the first time and presenting close contextual analyses of works of art, attention is given to artists’ cross-cultural interactions with painted/sculpted representations of the Maghreb particularly in Algeria, Tunisia and Morocco. Using an interdisciplinary ‘open platform of discussion’ approach, Kelly builds on established theory which places emphases on the gendered gaze. This entails a discussion on women’s painted perspectives of and contacts with Muslim women as well as various Maghrebi cultures and land—all the while remaining mindful of the subject position of the French artist and the problematic issues which can arise when discussing European-made ‘ethnographic’ scenes. Kelly argues that French women’s perspectives of the Maghreb differed from the male gaze and were informed by their artistic training and social positions in Europe. In so doing, French women’s socio-cultural modernity is also examined. Moreover, executed between 1861 and 1956, the works of art presented show influences of Modernism; therefore, this book also pays close attention to progressive Realism and Naturalism in art and the Orientalist shift into Modernist subject matter and form. Through this research into French women Orientalists, Kelly engages with important discussions on the crossing view of the historical female other with the cultural other, artistic hybridity and influence in art as well as the postcolonial response to French activities in colonial Algeria and the protectorates of Tunisia and Morocco. On giving focus to women’s art and the impact of cross-cultural interchanges, this book rethinks Orientalism in French art.

This book will be of particular interest to scholars in the History of Art, Gender Studies, History, and Middle Eastern and North African Studies.

Copyright:
2021 Mary Kelly The right of Mary Kelly to be identified as author of this work has been asserted by her in accordance with sections