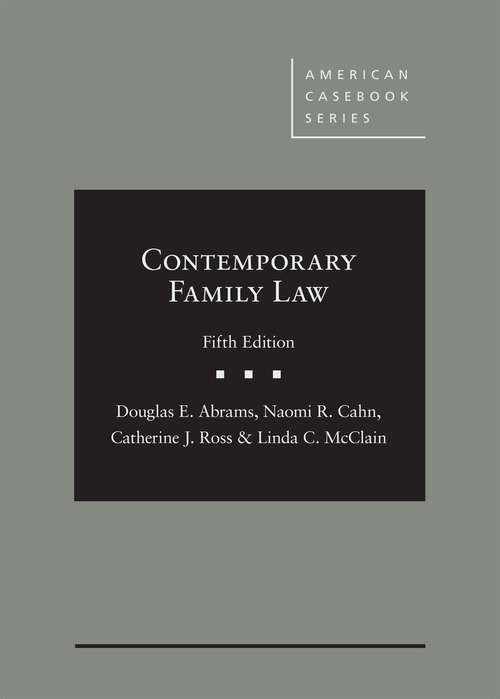 The book emphasizes that contemporary families take a variety of forms, including marital and nonmarital adult relationships, and that constitutional considerations play an increasingly important role in family law. The fifth edition preserves and builds on the approach of the earlier editions: presenting core substantive family law doctrine while also exploring ongoing and emerging policy debates and discussing the importance of cross-disciplinary collaborations with experts in fields such as psychology and accounting.

A limited number of new cases replace older ones in most chapters, and the introductions to and notes and questions following each lead case, statute, or article have been thoroughly updated. In addition, problems for discussion in each chapter―including new and updated problems for this edition―enable students to apply doctrine in real-life settings that lawyers face. The book also introduces the myriad issues central to family law practice and to a lawyer's ethical and professional responsibilities.

The book includes material on shifting paradigms in family law practice and the roles of family lawyers, and devotes separate chapters to professional ethics, alternative dispute resolution, and private ordering. The book addresses jurisdictional issues in one integrated chapter. In addition to providing a grounding in the historical and contemporary regulation of marriage, the book includes material throughout on the legal treatment of nonmarital couples and their children. The book also explores the diverse pathways to legal parentage and their impact on parent-child and co-parent relationships. Moreover, because child custody arrangements lead to some of the most acrimonious family disputes, this casebook devotes two chapters to custody: the first treats the initial custody decision, and the second explores continuing litigation concerning visitation, custody, and key childrearing decisions after the initial disposition, including disputes involving third parties such as cohabitants and grandparents. Both custody chapters include disputes involving nonmarital children. The fifth edition includes new and expanded material throughout.