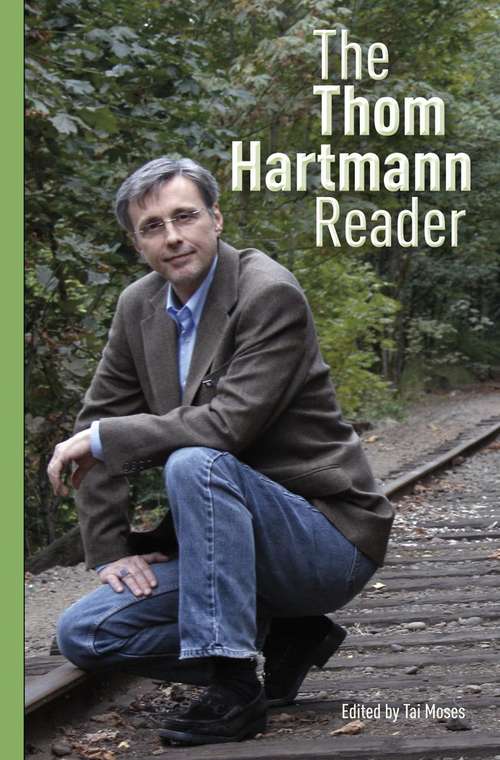 It's hard to pigeonhole Thom Hartmann. He has a unique synthesis of qualities not often found in one person: a scholar's love of history, a scientist's zeal for facts, a visionary's seeking after truth, an explorer's appetite for adventure and novelty. In addition to being the nation's number one progressive radio host, he's been an ad man, a psychotherapist, a private detective, and a homeopath. His writings encompass politics, history, ecology, psychology, and spirituality, among other subjects.

Even Hartmann's millions of loyal listeners and readers will be amazed at the breadth of his thought as evidenced by The Thom Hartmann Reader. Editor Tai Moses has pulled together Hartmann's writings from a dozen books and other sources to present a comprehensive picture of where Hartmann's wide- ranging intellect has led him over the past thirty years.

Hartmann is perhaps best known as a political thinker, and essays throughout this book express--in his characteristic impassioned and lucid style--his fierce commitment to Jeffersonian democracy and his virulent opposition to the cor- poratization of America. But you'll also discover his Older and Younger Cultures hypothesis, which identifies the root cause of so many of our social and environ- mental ills and points the way to a solution. You'll hear from Hartmann on how to keep our schools from treating children like assembly line products, why at- tention deficit disorder is not an affliction, and what cloudy Germany can teach us about solar energy. You'll meet the remarkable Gottfried Mu?ller, Hartmann's mentor and the founder of the humanitarian organization Salem International. You'll join Hartmann on fact-finding trips to Uganda, Russia, and four-thousand- year-old ruins in Peru.

As fascinating as these and other topics in The Hartmann Reader are, Hartmann's deepest aspiration has always been that his audience do more than just listen or read, that they become active, awakened agents of change. These essays are meant to inspire and motivate, to spur you to take some kind of action. As Hartmann says at the end of every radio program, "Get out there, get active! Tag, you're it!"