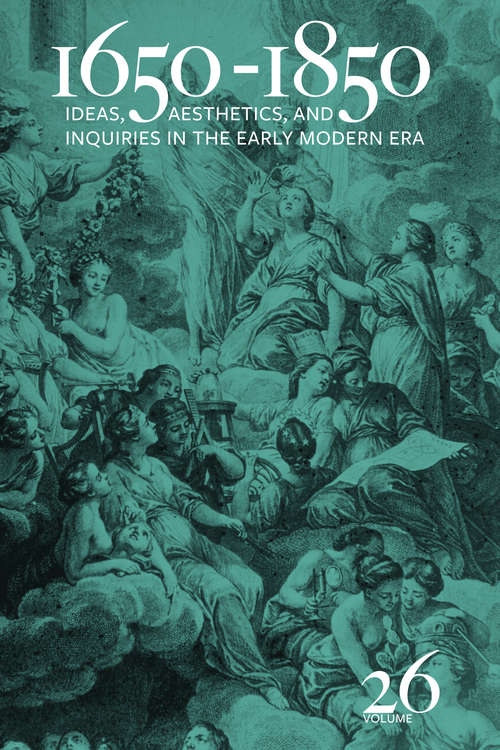 Volume 26 of 1650–1850: Ideas, Aesthetics, and Inquiries in the Early Modern Era travels beyond the usual discussions of power, identity, and cultural production to visit the purlieus and provinces of Britain’s literary empire. Bulging at its bindings are essays investigating out-of-the-way but influential ensembles, whether female religious enthusiasts, annotators of Maria Edgeworth’s underappreciated works, or modern video-based Islamic super-heroines energized by Mary Wollstonecraft’s irreverance. The global impact of the local is celebrated in studies of the personal pronoun in Samuel Johnson’s political writings and of the outsize role of a difficult old codger in catalyzing the literary career of Charlotte Smith. Headlining a volume that peers into minute details in order to see the outer limits of Enlightenment culture is a special feature on metaphor in long-eighteenth-century poetry and criticism. Five interdisciplinary essays investigate the deep Enlightenment origins of a trope usually associated with the rise of Romanticism. Volume 26 culminates in a rich review section containing fourteen responses to current books on Enlightenment religion, science, literature, philosophy, political science, music, history, and art.

1650-1850 publishes essays and reviews from and about a wide range of academic disciplines: literature (both in English and other languages), philosophy, art history, history, religion, and science. Interdisciplinary in scope and approach, 1650-1850 emphasizes aesthetic manifestations and applications of ideas, and encourages studies that move between the arts and the sciences—between the “hard” and the “humane” disciplines. The editors encourage proposals for special features that bring together five to seven essays on focused themes within its historical range, from the Interregnum to the end of the first generation of Romantic writers. While also being open to more specialized or particular studies that match up with the general themes and goals of the journal, 1650-1850 is in the first instance a journal about the artful presentation of ideas that welcomes good writing from its contributors.