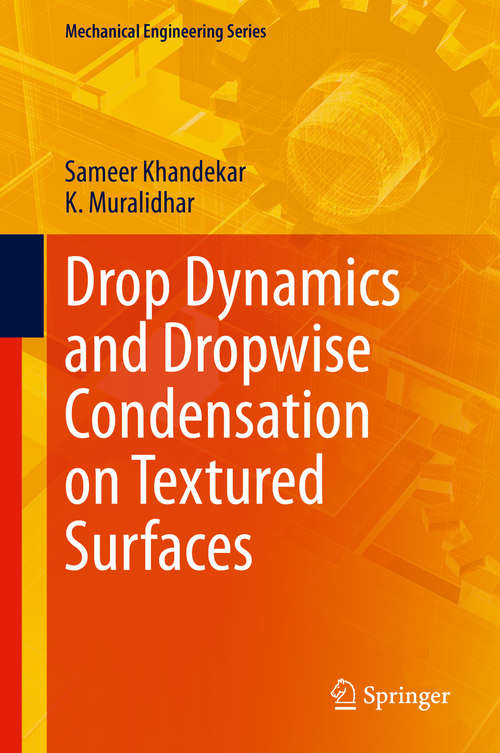 This book is an expanded form of the monograph, Dropwise Condensation on Inclined Textured Surfaces, Springer, 2013, published earlier by the authors, wherein a mathematical model for dropwise condensation of pure vapor over inclined textured surfaces was presented, followed by simulations and comparison with experiments. The model factored in several details of the overall quasi-cyclic process but approximated those at the scale of individual drops. In the last five years, drop level dynamics over hydrophobic surfaces have been extensively studied. These results can now be incorporated in the dropwise condensation model.Dropwise condensation is an efficient route to heat transfer and is often encountered in major power generation applications. Drops are also formed during condensation in distillation devices that work with diverse fluids ranging from water to liquid metals. Design of such equipment requires careful understanding of the condensation cycle, starting from the birth of nuclei, followed by molecular clusters, direct growth of droplets, their coalescence, all the way to instability and fall-off of condensed drops. The model described here considers these individual steps of the condensation cycle. Additional discussions include drop shape determination under static conditions, a fundamental study of drop spreading in sessile and pendant configurations, and the details of the drop coalescence phenomena. These are subsequently incorporated in the condensation model and their consequences are examined. As the mathematical model is spread over multiple scales of length and time, a parallelization approach to simulation is presented. Special topics include three-phase contact line modeling, surface preparation techniques, fundamentals of evaporation and evaporation rates of a single liquid drop, and measurement of heat transfer coefficient during large-scale condensation of water vapor. We hope that this significantly expanded text meets the expectations of design engineers, analysts, and researchers working in areas related to phase-change phenomena and heat transfer.