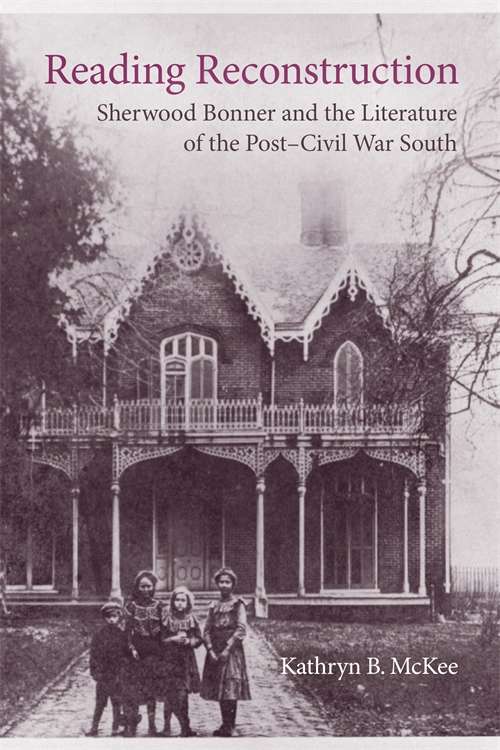 By: Scott Romine • Kathryn B. McKee
Login
Sign Up

Kathryn B. McKee’s Reading Reconstruction situates Mississippi writer Katharine Sherwood Bonner McDowell (1849–1883) as an astute cultural observer throughout the 1870s and 1880s who portrayed the discord and uneasiness of the Reconstruction era in her fiction and nonfiction works. McKee reveals conflicts in Bonner’s writing as her newfound feminism clashes with her resurgent racism, two forces widely prevalent and persistently oppositional throughout the late nineteenth century.Reading Reconstruction begins by tracing the historical contexts that defined Bonner’s life in postwar Holly Springs. McKee explores how questions of race, gender, and national citizenship permeated Bonner’s social milieu and provided subject matter for her literary works. Examining Bonner’s writing across multiple genres, McKee finds that the author’s wry but dark humor satirizes the foibles and inconsistencies of southern culture. Bonner’s travel letters, first from Boston and then from the capitals of Europe, show her both embracing and performing her role as a southern woman, before coming to see herself as simply “American” when abroad. Like unto Like, the single novel she published in her lifetime, directly engages with Mississippi’s postbellum political life, especially its racial violence and the rise of Lost Cause ideology. Her two short story collections, including the raucously comic pieces in Dialect Tales and the more nostalgic Suwanee River Tales, indicate her consistent absorption in the debates of her time, as she ponders shifting definitions of citizenship, questions the evolving rhetoric of postwar reconciliation, and readily employs humor to disrupt conventional domestic scenarios and gender roles. In the end, Bonner’s writing offers a telling index of the paradoxes and irresolution of the period, advocating for a feminist reinterpretation of traditional gender hierarchies, but verging only reluctantly on the questions of racial equality that nonetheless unsettle her plots.By challenging traditional readings of postbellum southern literature, McKee offers a long-overdue reassessment of Sherwood Bonner’s place in American literary history.