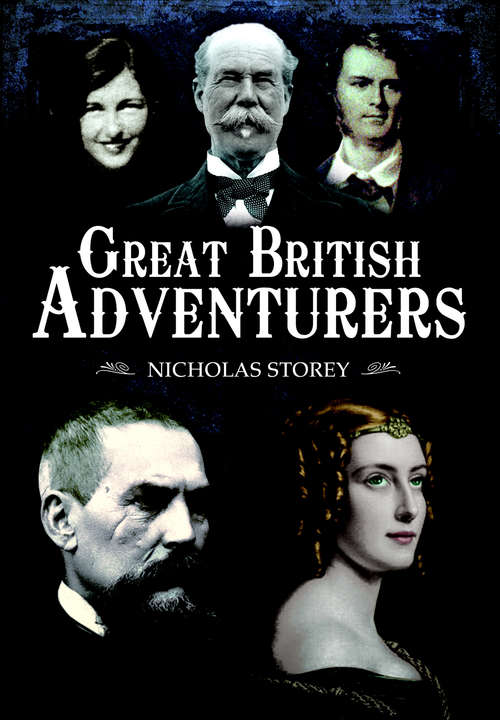 In selecting my adventurers, I have had to find limits. The first has been to confine my selection to men and women who are (at least loosely) British and, even then, service and adoption have sometimes, as with Krystyna Skarbeka, taken the place of birth, and I have chosen to ignore such things as competing national claims for Tenzing Norgay. The second limit that I have set myself is generally to exclude heroic adventurers in battle, simply because there is (rightly), so much already written about them, but I have found place for certain (representative) secret agents of the Second World War, whose acts (in voluntary service, beyond the call of simple duty), surely took them out of the arena of straightforward battle and into the realm of the most individual and courageous adventure. The result of these decisions remains to be judged but the overall objective has been to renew interest in the lives of some of our real heroes and heroines, as representative of the many others that there are; in an age in which contemporary sporting and pop art heroes dominate the news and provide the only readily evident inspiration, and also an age in which addiction to the computer screen nearly robs the young of memories and dreams of high adventure; of which ripping yarns are born. The third limit is a limit of time: this speaks for itself; otherwise howwould Drake and Raleigh, Clive of India, General Woolf and Captain Cook not have found their places? There have to be such limits. The final limit has been to exclude those who are widely famed already: what more is there to say of General Gordon or Dr David Livingstone of Captain Robert Falcon Scott and Captain Laurence Oates; even though what has been said should often be repeated? Moreover, although Sir Edmund Hillary is acknowledged as the first conqueror of Mount Everest; Tenzing Norgay was there with him and what of George Mallory who, some time before had died, either going up or coming down?To those who might accuse me of having been obscure, I just plead that my purpose has been to bring back into ready remembrance certain men and women, not widely fted now, who had great impact upon the accrual of knowledge of: other peoples, their customs and their countries; or who have striven, often against various obstacles (including the odds), to promote exploration and, sometimes, even to preserve life and liberty for others. To the erudite, who might say that I shed little new light and that the coverage is uneven, I plead, in mitigation of sentence, that my principal purpose has been to remind of worthy lives that might still stir our blood; and to bring them together, as representative of our adventurous people, in one handy volume.James Brooke, Rajah of Sarawak 1803–1868Mary Seacole 1805–1881 Richard and John Lander 1804–1834; 1806–1839Jane Digby 1807–1881General Sir James Abbott 1807–1896Colonel John Peard 1811–1880John William Colenso, 1st Anglican Bishop of Natal 1814–1883Sir Richard Burton 1821–1890 and John Hanning Speke 1827–1854 Emily Hobhouse 1860–1926Mary Kingsley 1862–1900Sir Francis Younghusband 1863–1942Colonel Percy Fawcett 1867–1925 and, in his wake, Peter Fleming OBE 1907–1971Cecil Henry Meares 1877–1937George Mallory 1886–1924 and Andrew Irvine 1902–1924Dame Freya Stark 1893–1993Sir Francis Chichester 1901–1972Gladys May Aylward 1902–1970Amy Johnson 1902–1941Krystyna Skarbek-Granville GM, OBE, Croix de Guerre Avec Palmes, born ca. 1908–1952Sir Fitzroy Hew Royle Maclean 1911–1996Tenzing Norgay GM 1914–1986 Violette Szabo GC, MBE 1921–1945The Present and the Future[Colonel John Blashford-Snell b. 1936Sir Ranulf Fiennes b. 1944Alan Hinkes b. 1954Adrian Hayes (45)Kenton Cool b. 1973Dame Ellen MacArthur b. 1976Rebecca Stephens b. 1982Xanadu and William Dalrymple]